No Third Way in Iraq 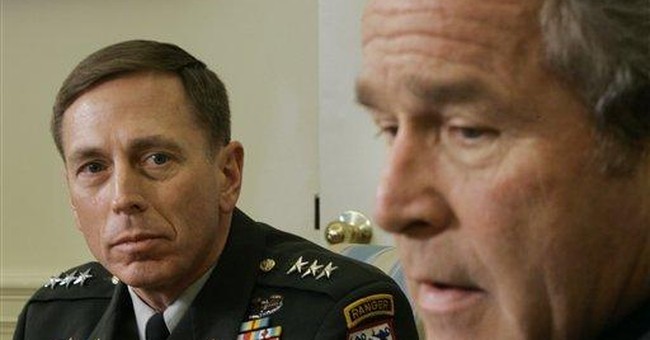 The very smart military blog Ace of Spades HQ speculated yesterday that Tony Snow might have been launching a trial balloon for an Iraq exit strategy rhetoric when he quoted President Bush's statement that, taking the long view, we won the war in Vietnam because, 30 years on, it is trending capitalist and has become a pro-American Pacific Tiger.

As a former press secretary, I am inclined not to read deep secret messages into Tony Snow's comments. The president made an arresting statement, and his press secretary commented favorably on it. That is what press secretaries tend to do for a living.

But I (along with Ace of Spades, Mickey Kaus's blog, and I assume many others) could not help but hear Tony Snow's elaborations in the context of President Bush's less than ferocious State of the Union phrases that "it is still within our powers to shape the outcome of this battle," and we should [at least] "turn events toward victory."

All of this mental stretching and twisting comes, of course, while a majority of perhaps even Republican senators express support for a war condemnation resolution, the Pelosi Democrats call to frog march our troops out of Iraq (i.e. re-deploy) starting around May Day, and she who has experience with unnamed evil men (aka, Hillary) stamped her formidable Prada heels and demanded that President Bush should "extricate our country" from Iraq before leaving office, as it would be "the height of irresponsibility" to pass the war along to the next commander in chief. (I suppose she is selflessly looking out for Obama's interest on that point.)

It is certainly bracing to be living and working in the capital of the world's richest and most powerful nation during wartime, and to hear so little wisdom or courage emanating from either the government or opposition benches. Even the capitals of backwater third-rate powers usually have a better grip on reality and their own national interest than we do here at Colossus-opolis.

It seems that our vast current prosperity and the still mentally reassuring great oceans that appear to guard us from the outer world's madness create the illusion in the minds of far too many that we are -- as a nation -- immune from the consequences of our foolishness and slackness.

Even some at the White House seem to be buying into the sense that "the surge" is our last chance in Iraq -- after which failure (should it come), Iraq will have to take care of itself, with a greatly reduced number of re-deployed U.S. troops looking helplessly on from somewhere over the rainbow (Kuwait, Okinawa, Timbuktu or perhaps the Epcot Center at Disney World).

Sen. Richard Lugar described in the Washington Post the strongest, most rational sounding version of a redeployment:

"A potent redeployment of U.S. forces in the region to defend oil assets, target terrorist enclaves, deter adventurism by Iran and provide a buffer against regional sectarian conflict. In the best case, we could supplement bases in the Middle East with troops stationed outside urban areas in Iraq. Such a redeployment would allow us to continue training Iraqi troops and delivering economic assistance, but it would not require us to interpose ourselves between Iraqi sectarian factions."

I am not sure that such a limited redeployment is exactly what the war critics have in mind. But even if Murtha, Pelosi, Biden, Hegel, et al. and the passionate anti-war element of the public would accept it, it would probably only delay full retreat. Because, to the extent that Lugar's redeployment removes our troops from Baghdad and other violent areas, exactly to that extent we will be getting poorer intelligence, have less influence on events and be more passive sitting behind fortifications.

How exactly would we able to stop Iranian border intrusions from these remote, passive locations when we have not been able to stop it while currently forward deployed? How would we target terrorist enclaves if we are not in the field gathering intelligence from the people (whose trust has to be earned before their tips will be given to us)? Would our redeployed troops be placed in the oil fields, or over the horizon and forced to truck or helicopter in when an emergency arises -- remembering that it is during the transporting of troops that they are most vulnerable to blind-sided attacks?

Both in conventional and counter insurgency warfighting, fixed fortifications, as Gen. George Patton said, "are monuments to the stupidity of man." In 1983, we lost almost 300 fine Marines who were supposedly bivouacked out of harm's way.

Now is a good time for clear thinking and speaking. If we intend to succeed (and it is vital that we do), then we must persist. If the "surge" doesn't work, then more troops and different strategies should be employed.

If we are going to throw in the towel, then we should bring the troops home promptly, lick our wounds and prepare for the inevitable Third Gulf War, which we will have to fight under far worse conditions than currently. Either of those options are at least honest (although the latter is dangerously foolish).

But the current mentality in Washington -- to pretend that there is a third way between victory and defeat -- is morally despicable. Washington politicians of both parties are trying to salve their consciences for the ignominy of accepting defeat by fooling either themselves or the public into believing they are doing otherwise.

Perhaps they can fool their own flaccid minds, but history grades hard and true. And history may enter its ledger with shocking promptness.