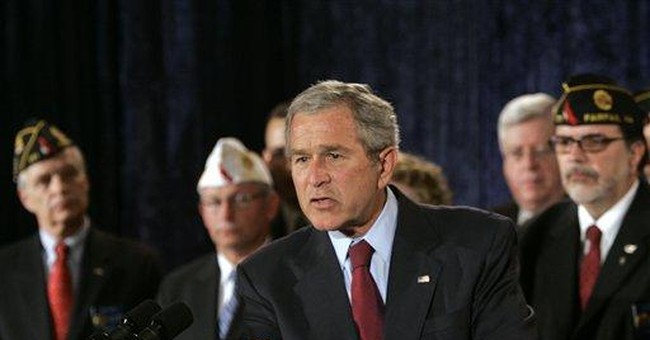 It began as a bill to support our troops – the President’s request for additional funding to strengthen operations overseas. However, the Iraq troop funding bill passed by the House and Senate and headed for a veto by President Bush has become a bundle of special interest pork and a dangerous plan to undermine our military leaders.

While our troops are defending freedom around the world, the leadership here at home has a responsibility to provide them the resources necessary to complete their mission. By its very nature, an emergency troop funding bill should do exactly that - fund our troops. And, to its credit, Congress did approve the funding requested by the President for our military operations in Iraq and Afghanistan. This is the point where further debate over the legislation should have ended.

In rather short order, a bill to fund our troops has become a vehicle for spinach growers, salmon fisheries, and over $20 billion in non-defense special interests. Fearing there would not be enough votes to pass a bill that ties the hands of our military, Democrat leadership wooed those who had rightful reservations and objections with earmarks and promises. This type of pet-project diplomacy within Congress is clearly inappropriate and particularly at a time when the primary concern should be providing for our military.

Pork spending, however, is little more than a relative nuisance when you compare it to the arbitrary strings and guidelines attached to the funding bill. As has been widely reported, many in Congress have taken it upon themselves to declare Congress qualified to make military decisions. Attempting to circumvent the constitutionally outlined powers of the Commander-in-Chief, the Majority party mandated a date certain for withdrawal as their effort to micromanage our commanders in the field. No matter how you cut it, the 535 elected Members of Congress have no Constitutional authority to detail how a war should be fought.

The mainstream media and strategy experts have lambasted this foolish plan and pointed out the insane use of troop funding for pork funding. One editorial board called the Iraq funding bill, “an attempt to impose detailed management on a war without regard for the war itself.” Nevertheless, the most condemning commentary on this type of military strategy can be found in the lauded Iraq Study Group’s December 2006 report in which Co-Chairmen James A. Baker clearly stated that the “Iraq Study Group set no timetables and we set no deadlines. We believe that military commanders must have the flexibility to respond to events on the ground.”

President Bush has vowed to veto any piece of funding legislation that seeks to undermine our military commanders in the field. Despite the early warnings that this type of legislation would never become law, many in Washington chose to go forward for clear political gain in order to decry a military strategy with which they disagree. There are plenty of opportunities in politics to make one’s point without compromising the needed funding for our troops fighting abroad. This most recent action does a disservice to our troops, our budget and our Constitution.