Could the shine be coming off Obama? 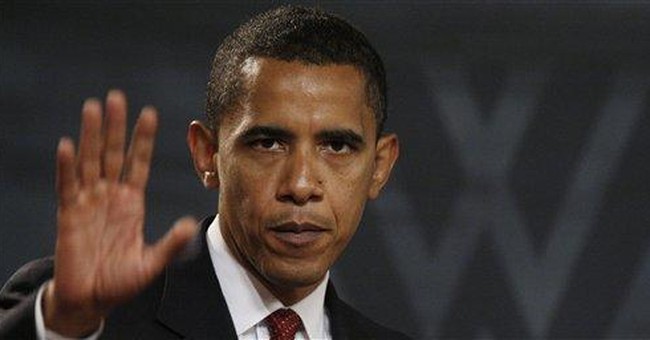 Barack Obama has been criticized for his failure to campaign beyond platitudes. The 46-year-old Illinois pol, who at age 45 already had two best-selling autobiographies, has raised more money for the Democratic Presidential primary campaign than Hillary Rodham Clinton. He is the clear leader in the polls among the non-Hillarys. Last week, he tried to play strategic thinker, but fell flat.

Sensing that his glass ceiling might not be his youth or his race, but rather his lack of experience as anything other than Chicago neighborhood activist, Obama gave a "major foreign policy address." The vast majority of the address was unremarkable enough, but he made headlines when he abandoned his greatest asset in the Democratic primary, First Dove.

The Democrats' primary electorate is rife with peaceniks and Bush-haters. They are slow to back Hillary because she voted for the war and has refused to apologize. Obama was against the war from the beginning. That may not help him much in the general election, should he get there atop the ticket, but it is his chief attraction to left-wing activists who love to pretend they hate Hillary.

Obama risked throwing that chief asset overboard when he tried to play hawk last week. He mustered up his testosterone and squeaked that he would order U.S. forces into the sovereign territory of our ally in the War on Terror, Pakistan, should he receive actionable intelligence and should the Pakistanis prove slow to act.

On the next day, in a follow up, he stated that he would under no circumstances use nuclear weapons on Pakistani soil when chasing down Al Qaeda leaders - then he abruptly uttered "scratch that." Apparently, Commander-in-Chief Obama will keep the "nuke our allies" option on the table.

Perhaps Barack is too young to remember that this was the group that wanted to unilaterally disarm at the height of the Cold War. They are the "No-Nukes" crowd. They don't even want to nuke Pakistan.

It is over for Obama. He just nuked his campaign.