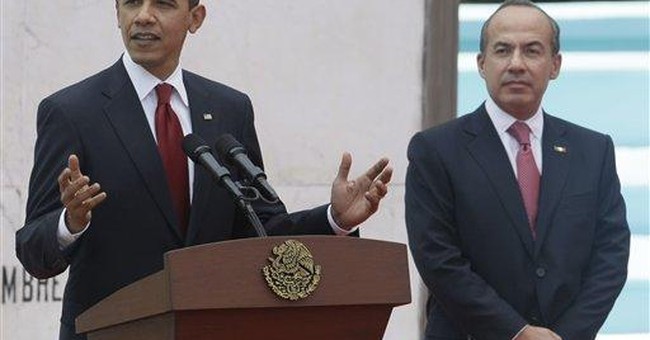 Recent news stories asserting that President Obama’s interest in pursuing cap-and-trade legislation is dwindling are premature. These media accounts make too much of rumors that Obama is backing away from auctioning 100 percent of carbon emissions credits and the Administration’s only tepid support of proposed global warming legislation authored by Representatives Henry Waxman (D-CA) and Ed Markey (D-MA).

In reality, sketchy plans and letting Congress take the lead is classic Obama.

What Obama lacks in leadership, substance and management skills, he more than makes up for with rhetoric and ideological zeal. Time and again Obama shows he will use his power to drive the left-wing agenda without regard to economic consequences or loss of liberty. Moreover, with the liberal holy grail of penalizing fossil fuel use in his grasp, it’s doubtful Obama will shy away.

Obama’s dealings with General Motors provide ample evidence that his strident left-wing beliefs supersede sound economic judgment. With GM, Obama is leveraging bailout money to shape the automobile industry according to the designs of the environmental lobby.

Soon after Obama fired GM CEO Rick Wagner, the Administration announced it was overriding the recommendation of the president’s own auto task force by deciding to move forward with the Chevy Volt – the company’s electric car.

But it’s no secret that the Volt is going to be a financial loser.

In its March 30 report on the viability of GM, the auto task force said “…while the Chevy Volt holds promise, it will likely be too expensive to be commercially successful in the short-term.”

GM’s new CEO Fritz Henderson acknowledges that vehicles based on first generation technology such as the Volt will not be profitable. In an interview with Automotive News, Henderson commented on the Volt saying, “…the cost is high. And that means, it doesn't necessarily pay the rent. It actually consumes rent when it's launched."

The political agenda behind the decision to sell the Volt was highlighted by an analyst at the Center for Automotive Research, who said, “But the Obama administration has put such a high priority on the electrification of the vehicle that it would be a very difficult policy decision to drop the Volt.”

With politics driving decisions, it was not surprising to see Obama use $285 million of the $787 billion stimulus package to order over 17,000 fuel-efficient vehicles from GM, Ford, and Chrysler, including 2,500 hybrids.

Similarly, Obama is ignoring market reality in his quest to significantly increase use of renewable energy. Recent decisions by oil giants British Petroleum (BP) and Shell makes it clear that carbon-based fossil fuels are the most efficient way to power our economy.

Not long ago both companies sought to demonstrate their corporate social responsibility by touting their commitments to renewable energy. BP’s high profile “Beyond Petroleum” advertising campaign was designed to emphasize its pledge to alternative fuels.

Shell is now refusing to invest additional resources in wind and solar power and BP – going back to its petroleum roots – cut its investments in renewable energy.

In fact, these companies are now looking to meet future energy needs by investing in Canadian oil sands – a carbon-rich source of energy that emits more carbon dioxide than does conventional oil.

The reason for this was made by Energy Secretary Steven Chu, who wrote in a Newsweek commentary that “Strictly from a physicist's perspective, burning oil for fuel can be understood.” Translation: fossil fuels are an efficient energy source.

Physics and economics aside, energy companies are on a collision course with Obama’s political directive to “make the U.S. a leader on climate change” and “save our planet from the ravages of climate change…”

As John Deutch, former director of the CIA and a professor at MIT said, “The important thing is for the government to establish a carbon policy. You can be absolutely confident that oil companies will pursue that, as will any other companies.”

The best way for Obama to achieve the liberal nirvana of electric cars, wind and solar energy is through the brute force of government intervention via cap-and-trade legislation. Alternatives only become cost effective when the cost of traditional energy sources are increased.

Obama reiterated his unyielding support of cap-and-trade in a recent speech on the economy, saying “But the only way to truly spark this transformation is through a gradual, market-based cap on carbon pollution, so that clean energy is the profitable kind of energy… If businesses and entrepreneurs know today that we are closing this carbon pollution loophole, they will start investing in clean energy now.”

If Obama is willing to mandate that GM – a company on the verge of bankruptcy – sell a financial loser for the cause, he will not abandon the opportunity to regulate carbon emissions regardless of the economic costs.