Wake Up Wal-Mart: Global Warming Regulation is Bad for Business 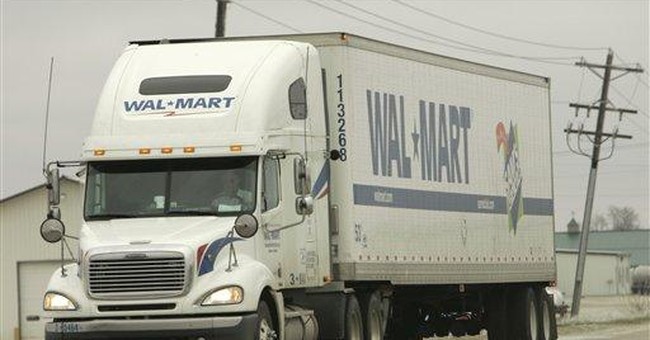 Wal-Mart needs to appreciate an observation made by Napoleon: “Never interrupt your enemy when he is making a mistake.”

At the recent U.S. Conference of Mayors Climate Protection Summit, Wal-Mart announced the company was forming a partnership with the Clinton Climate Initiative to develop and sell energy saving products for lower prices to cities. This announcement is further evidence that Wal-Mart’s Corporate Social Responsibility (CSR) policies are damaging its business.

Wal-Mart believes it can use the concern about global warming to improve its public image. Accordingly, the company is disclosing its estimated environmental impact and promoting its actions to reduce its carbon footprint. By following this model of a CSR company, Wal-Mart hopes to earn public credit by playing an active role in being part of the “solution”.

The problem for Wal-Mart is its CSR strategy has blinded it from the reality that global warming alarmism and subsequent regulation is a colossal business risk. In the short term, the company will get some positive headlines for being “green” but in the long term, the impact of high-energy prices from global warming regulation will harm its business.

In 2006, Wal-Mart joined a number of other companies in a Senate hearing and urged Congress to establish mandatory emissions on carbon dioxide. At the hearing, Wal-Mart’s vice president of corporate strategy and sustainability said, “Because we see climate as a critical social issue and because we believe that greenhouse gases can be cost-effectively reduced throughout the economy, Wal-Mart would accept a mandatory cap-and-trade system to control greenhouse gas emissions.”

Because of its mammoth size, energy is a major driver of Wal-Mart’s operating expenses. It operates one of the largest truck fleets in the nation. In fact, according to its website, Wal-Mart owns almost 7,000 trucks that drive over 870,000,000 miles a year and consume an estimated 134,158,000 gallons of diesel fuel.

In addition, Wal-Mart is the largest private consumer of electricity in the U.S. Clearly, even a modest increase in energy prices will dramatically increase the operating cost of its business.

With oil prices approaching $100 a barrel, Wal-Mart’s customers will be squeezed even further. According to a recent story in the Wall Street Journal, the cost to heat a home in the northeast could more than double, “Between 2000 and 2005, the average cost in New England for a winter's supply of heating oil was about $900 a household. Last year, it hit a record $1,433 and this year it could reach $2,200, said Mark Wolfe, executive director of the National Energy Assistance Directors Association.”

Wal-Mart does recognize its energy liability and it is trying to reduce its energy consumption in its truck fleet and stores – that’s good business. However, these savings will be overwhelmed by a dramatic rise in energy prices resulting from global warming regulation. Even if the company obtains revenue from selling carbon credits, its customer’s purchasing power will be reduced.

Ironically, by acting “responsibly” Wal-Mart is negligent to its shareholders, employees and customers. Supporting regulations that will decrease their customer’s standard of living and add to its operating costs is an example of corporate irresponsibility.

A responsible company would first investigate the claims about man’s role in climate change and set a business course based on reality despite the prevailing notions of the liberal elite. Such an investigation would lead Wal-Mart to recognize the unproven relationship between carbon dioxide emissions and global warming. In this scenario, Wal-Mart would execute a completely different strategy: lobby for a national policy encouraging domestic energy exploration.

However, conducting this type of due-diligence is counter to the CSR movement whose philosophical underpinning is socialism.

Finally, it will only be a matter of time until the labor unions and environmental activists use Wal-Mart’s immense carbon footprint, which the company has graciously provided on its website, as an argument against building more superstores. In the U.S., its truck fleet emits 1,365,000 metric tons of carbon dioxide and its stores release over 15 million tons of carbon dioxide.

Prompted by its critics, many mayors will find it politically expedient to oppose construction of new superstores. With some mayors campaigning against bottled water to reduce greenhouse gas emissions, targeting Wal-Mart is a no-brainer.