United States Senator Tim Scott is working daily to ensure that every American has the opportunity to succeed.

Growing up poor in a single parent household in North Charleston, South Carolina, Tim learned the importance of faith, hard work, and living within your means. By understanding the basic economic principles Washington so often forgets, and with the same determination he brings to advancing conservative principles in the Senate, Scott grew from his humble beginnings to build one of the most successful Allstate agencies in South Carolina.

An unbridled optimist, Senator Scott believes that despite our current challenges, our nation’s brightest days are ahead of us. As a teenager, Tim had the fortune of meeting a strong, conservative mentor, John Moniz. Moniz helped instill in Tim the notion that you can think your way out of poverty, and that the golden opportunity is always right around the corner. The American Dream is alive and well, and Tim’s story is a concrete example of that.

Senator Scott was sworn in to the U.S. Senate in January 2013. He has launched his Opportunity Agenda, a new way forward including robust initiatives that give our students and workers the greatest chance to succeed. Tim knows that success is created in studio apartments and garages, at kitchen tables, and in classrooms across the nation - not in government conference rooms in Washington.

His agenda will empower Americans through economic freedom and high-quality education. Senator Scott will work with anyone else committed to building a better future to develop bold ideas that break away from our past failures. This includes tax reform to increase economic freedom, expanding school choice so every child has a chance at a quality education, and providing alternatives for single parents to work their 40 hours a week by allowing for wider use of comp time.

Senator Scott is also working to find ways to help redevelop our poorest areas without pushing current residents out, bring down energy costs that consume a quarter of after-tax income for families making $30,000 or less, help young offenders and those aging out of the foster care system to receive the vital opportunity for education, and ensure our kids who want to attend college can do so without incurring debilitating debt.

Tim also continues his work to get our nation’s spending under control, and has opposed measures he believes do not go far enough. In his first hundred days as a Senator, he worked with colleagues to introduce a Balanced Budget Amendment, and was an original cosponsor on a bill to permanently ban the wasteful earmarking process.

Prior to being sworn in to the Senate, Senator Scott served in the United States House of Representatives from 2011-2013, where he was a member of House leadership and sat on the influential House Rules Committee. Tim also served on Charleston County Council for 13 years, including four terms as Chair and in the South Carolina House of Representatives for two years where he was elected Chairman of the Freshman Caucus and House Whip. He was the owner of Tim Scott Allstate and partner of Pathway Real Estate Group. 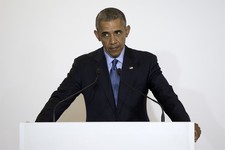 The Obama Administration’s Secret Slush Funds
May 25, 2016
Obamacare Must Go Regardless of Who is Obama’s Next HHS Nominee!
April 17, 2014 |
Commentary Archives
CARTOONS | Tom Stiglich
View Cartoon