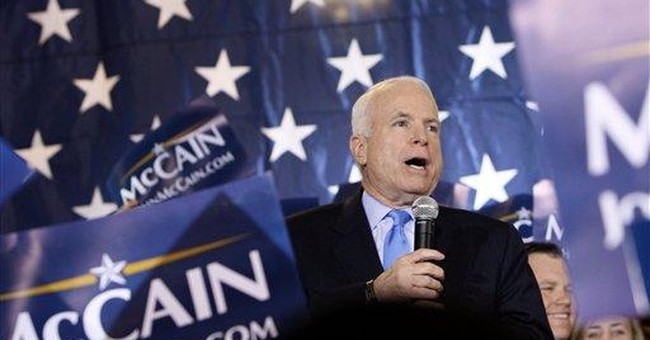 Voters will be pardoned for speculating whether aliens have somehow captured Senator John McCain, nominally a Republican candidate for President, and replaced his mind with that of Democratic class-warrior candidate John Edwards.

The latest evidence came during the January 5, 2008 Republican candidates’ debate in Manchester, New Hampshire, when Senator McCain slurred the pharmaceutical industry as “the big bad guys.”  Thus, in addition to his dubious positions on tax cuts, waterboarding of terrorists and McCain/Feingold’s free speech restrictions, he has now gone on record attacking America’s pharmaceutical companies, which constitute one of this country’s most innovative and valuable industries.

In doing so, Senator McCain also joined the chorus demanding importation of medicines from foreign countries, which is one of the most deceptive and dangerous policy ideas in our present political climate.  Consider the following exchange between himself and Mitt Romney, in which McCain descends into his best conspiracy theorist impression:

McCain:  Why shouldn’t we be able to reimport drugs from Canada?  It’s because of the power of pharmaceutical companies…

McCain:  Well, they are.

Romney:  No, actually, they’re trying to create products to make us well and make us better, and they’re doing the work of the free market.  And are there excesses?  I’m sure there are, and we should go after excesses.  But they’re an important industry to this country.  But let me note something else, and that is the market will work.  And the reason healthcare isn’t working like a market right now is you have 47 million people that are saying, “I’m not going to play.  I’m just going to get free care paid for by everybody else.”  That doesn’t work.  Number two, the buyer doesn’t have information about what the cost or quality is of different choices they could have.  If you take the government out of it to a much greater extent, you’d get it to work like a market and we’ll rein in costs.

No, Senator McCain, pharmaceutical innovators are not “the big bad guys,” and importation of foreign drugs is a terrible idea.

In reality, America’s pharmaceutical and biotechnology companies invest literally billions of dollars each year to invent and perfect new medicines that save lives and allow Americans to live more comfortably, longer, and healthier.  There is not a single person in America who hasn’t benefited personally from these remarkable innovations, or has family members or friends who have.

And while importation of drugs may superficially sound like a good idea, it is actually quite pernicious.  Especially at a time when America’s trade deficit receives so much hysteria from politicians and the mainstream media.

For starters, importation of foreign drugs will flood the market with dangerous counterfeit knockoffs from across the globe.  As tragically illustrated by recent stories of contaminated lead-paint toys, toothpastes, dog food and other products, this is a potentially serious problem.  Further, even drugs imported from such countries as Canada often themselves originate from places like Pakistan, Bulgaria, Argentina and South Africa.  This inherent safety risk precisely explains why every single Food & Drug Administration commissioner since 1969 has opposed importation.

Second, importation will undermine American medical innovation.  The pharmaceutical industry remains one in which America continues to lead the world.  It creates revolutionary life-saving and life-improving drugs, but this requires gigantic up-front investments of money, time and research.  In 2006 alone, pharmaceutical innovators invested an estimated $55 billion in such research and development, and provided millions of valuable jobs.  If our nation’s pharmaceutical and biotechnology companies suddenly cannot recoup their investments due to a flood of foreign counterfeits and artificially-discounted drugs, the reward for investing in innovation will wither along with thousands of high-paying and high-tech jobs.  Obviously, this is hardly the time to be taking such a risk.

Third, allowing importation of foreign drugs will exacerbate our current litigation and “jackpot justice” crisis facing America and the healthcare industry.  If pharmaceutical companies, pharmacists, hospitals and physicians are suddenly exposed to even more lawsuits because opportunistic trial lawyers blame them for harm caused by foreign counterfeits or knockoffs, healthcare costs and crippling runaway litigation will only skyrocket further.

Fourth, legalizing importation of foreign drugs will only increase the already-overburdened FDA’s caseload.  In doing so, the FDA’s ability to protect American consumers’ safety will be further undermined.

Simply put, there is already too much regulation and persecution of the pharmaceutical industry, not too little.  Allowing importations to flood the market and gain a free ride on the backs of American pharmaceutical innovators will only undermine this critical enterprise.

Senator McCain, please reconsider your slur against America’s invaluable pharmaceutical industry, and renounce your ill-advised position toward it and importation of foreign drugs.  One irresponsible class-warrior candidate in the style of John Edwards is more than enough.