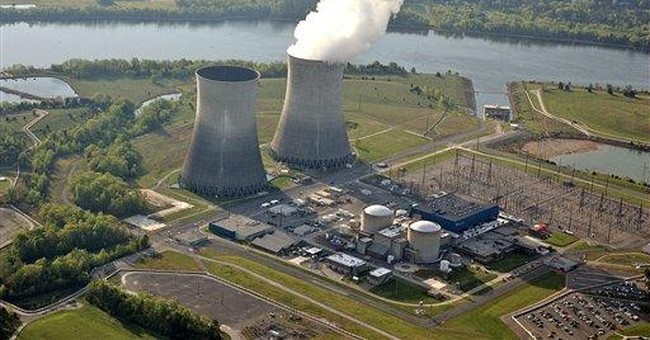 What does the famed nuclear war “Doomsday Clock” have to do with climate change hysteria? According to Al Gore’s minions, everything.

For the first time since the Clock’s inception, its hands have been advanced for a reason other than the prospect of nuclear war. Not because of mass terrorism, not an outbreak of catastrophic conventional war, not political instability in a nuclear-armed nation or other concrete event, but rather due to that trendy, all-purpose bogeyman of the left – climate change.

First introduced by the Bulletin of the Atomic Scientists at the University of Chicago in 1947, the iconic clock face shows the remaining “minutes to midnight,” with midnight symbolizing humanity’s nuclear destruction. The initial 1947 Clock showed seven minutes until midnight as the Cold War descended upon the world, and the minute hand has been advanced or turned back 19 times since that date in response to various geopolitical crises and the threat of global nuclear war.

During subsequent years, the Clock became increasingly politicized to reflect the leftist sympathies of its Board of Directors. For instance, the Board illogically turned the Clock back to 12 minutes in 1972 with the signing of the Anti-Ballistic Missile Treaty, even though this treaty actually eliminated missile defense protections.

The politicized nature of the Clock became even more obvious with Ronald Reagan’s ascent to the White House. During the 1980s, the Board predictably expressed its antipathy toward President Reagan, who ultimately ended the Cold War without firing a shot, by advancing the minute hand all the way to just three minutes before midnight. The Board’s naked political basis for this decision is best illustrated by quoting its own website:

The United States seems to flout the few arms control agreements in place by seeking an expansive, space-based anti-ballistic-missile capability, raising worries that a new arms race will begin... Reagan scraps any talk of arms control and proposes that the best way to end the Cold War is for the United States to win it.

Yes, how silly of that foolish warmonger Ronald Reagan to think that America could actually “win” the Cold War. The Kremlin itself couldn’t have stated it in a more one-sided manner.

In this light, the recent addition of climate change hysteria to the Clock’s calculation is merely a pathetic continuation of its gradual politicization.

Nevertheless, the blatant incorporation of global warming silliness is astounding and noteworthy. On January 17, 2007, giddy with anticipation of the release of Al Gore’s “An Inconvenient Truth,” the Board announced that it was advancing the Clock two minutes. Consequently, it now reads five minutes to midnight. According to the Clock’s official website:

We have concluded that the dangers posed by climate change are nearly as dire as those posed by nuclear weapons. The effects may be less dramatic in the short term than the destruction that could be wrought by nuclear explosions, but over the next three to four decades climate change could cause dramatic harm to the habitats upon which human societies depend for survival.

Of course, the Board neglects to mention that climate change hysterics in the 1970s asserted that global cooling, not global warming, was threatening massive crop failure and billions of human deaths through starvation. But that would be an “inconvenient truth,” as Mr. Gore would say.

In what can only be charitably described as breathtaking absurdity, the Board proceeds to assert that climate change is second only to nuclear war in terms of its threat to human existence:

Global warming poses a dire threat to human civilization that is second only to nuclear weapons.

Did the Board sleep through 9/11? Have they ever heard of Darfur? What about diseases such as malaria that still kill millions because environmentalists in wealthier countries oppose the use of simple preventative agents like DDT?

One can only wonder what pet political issue the Clock’s Board will attempt to dramatize by adding to its minute calculus. Socialized medicine? Secondhand smoke? Labor union protections? Trans-fats?

Sadly, none of these would be a shock in light of the clock’s politicized history.