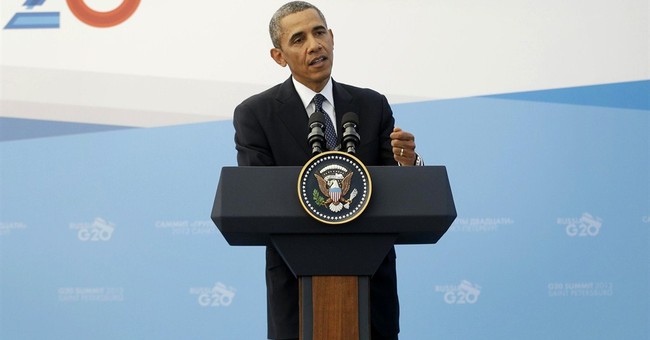 Trending
Chickens are coming home to roost for Barack Obama, both at home and overseas. When he first entered the White house, to worldwide acclaim, and backed by huge majorities in both the Senate and the House of Representatives, he could do whatever he wanted -- and could do no wrong, in the eyes of the mainstream media.

People believed whatever he said, whether about how he would cut the federal deficit in half during his first term or how people could keep their current insurance and their current doctor under ObamaCare, which would also insure millions more people and yet somehow lower the costs at the same time.

Of course he did none of these things. The Obama administration added more to the national debt in his first term than President Bush had in both his terms put together. As for ObamaCare, which has not yet fully taken effect, health care costs have already gone up, and many people's hours of work have already gone down, as employers seek to escape the huge costs of ObamaCare by hiring part-time workers, who are exempt.

As for foreign policy, President Obama began by betraying a pre-existing American commitment to allies in Eastern Europe, to supply them with an anti-missile defense system. These nations had risked the wrath of Russia by allying themselves with the United States, but Obama blithely talked about pressing the "reset button," as he flew off to Moscow to try to cut a deal with the Russians behind their back.

His boorish behavior toward one of our oldest and most important allies (Britain) and his insulting behavior toward the Prime Minister of our staunchest ally in the Middle East (Israel) were more of the same.

Meanwhile, Obama fawned over the rulers of other nations, bowing deeply from the waist before the king of Saudi Arabia and the emperor of Japan, in a gesture of subservience that no other President of the United States had ever stooped to. But the adoring media never asked the most obvious question: "What kind of man is this, who feels a need to lower his own country?"

President Obama was caught by a microphone that he did not know was on, telling Russian President Medvedev to assure "Vladimir" that he could be more "flexible" with him after he was past the 2012 elections, and was no longer constrained by the American voters.

Far from getting Putin's respect, he deservedly earned Putin's contempt. When Obama's new Secretary of State, John Kerry, went to Moscow for the first time in that official capacity, Putin kept him waiting for hours before bothering to see him.

At home, when Republicans in Congress tried to suggest some changes in the ObamaCare legislation, back when it was being rushed through Congress too fast for the Congressmen to read it, Obama's response was to remind the Republicans that he had won the election.

Now these and other chickens are coming home to roost.

Today, President Obama needs Republican votes in Congress to get a majority that will put Congress on record as backing his planned military actions against Syria. And he is by no means certain to get all the Democrats' votes.

Some other nations have given us verbal support -- and only verbal support. When it comes to actual military action, some of the Europeans will fight to the last American.

Finally, Barack Obama will try to drum up support from the American people whom he has lied to and deceived, time and time again. On Tuesday night, will he be able to rekindle the old magic again with his rhetoric? Or have those chickens come home to roost as well?

Will President Obama be able to convince the people of the urgency of what he wants to do, when he has already delayed so long that the Assad regime has had ample time to hide the chemical weapons and otherwise prepare to minimize whatever Obama does?