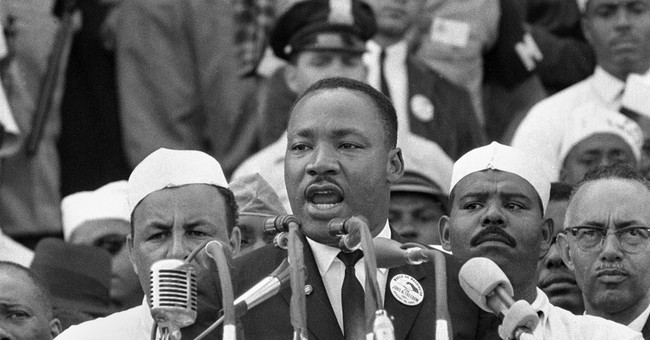 Trending
The 50th anniversary of the March on Washington, and of the Reverend Martin Luther King's memorable "I have a dream" speech, is a time for reflections -- some inspiring, and some painful and ominous.

At the core of Dr. King's speech was his dream of a world in which people would not be judged by the color of their skin, but by "the content of their character."

Judging individuals by their individual character is at the opposite pole from judging how groups are statistically represented among employees, college students or political figures.

Yet many -- if not most -- of those who celebrate the "I have a dream" speech today promote the directly opposite approach of group preferences, especially those based on skin color.

How consistent Martin Luther King himself was as he confronted the various issues of his time is a question that can be left for historians. His legacy to us is the "I have a dream" speech.

What was historic about that speech was not only what was said but how powerfully its message resonated among Americans of that time, across the spectrum of race, ideology and politics. A higher percentage of Republicans than Democrats voted in Congress for both the Civil Rights Act of 1964 and the Voting Rights Act of 1965.

There has been much documented racial progress since 1963. But there has also been much retrogression, of which the disintegration of the black family has been central, especially among those at the bottom of the social pyramid.

Many people -- especially politicians and activists -- want to take credit for the economic and other advancement of blacks, even though a larger proportion of blacks rose out of poverty in the 20 years before 1960 than in the 20 years afterwards.

But no one wants to take responsibility for the policies and ideologies that led to the breakup of the black family, which had survived centuries of slavery and generations of discrimination.

Even when those who lagged behind have advanced, they have not always caught up, even after centuries, because others were advancing at the same time. But when blacks did not catch up with whites in America, within a matter of decades, that was treated as strange -- or even a sinister sign of crafty and covert racism.

Civil rights were necessary, but far from sufficient. Education and job skills are crucial, and the government cannot give you these things. All it can do is make them available.

Race hustlers who blame all lags on the racism of others are among the obstacles to taking the fullest advantage of education and other opportunities. What does that say about the content of their character?

When the Civil Rights Act of 1964 was pending in Congress, my hope was that it would pass undiluted, not because I thought it would be a panacea but, on the contrary, because "the bitter anticlimax that is sure to follow may provoke some real thought in quarters where slogans and labels hold sway at the moment."

But the bitter anticlimax that did follow provoked no rethinking. Instead, it provoked all sorts of new demands. Judging everybody by the same standards was now regarded in some quarters as "racist" because it precluded preferences and quotas.

There are people today who talk "justice" when they really mean payback -- including payback against people who were not even born when historic injustices were committed.

The nation has just been through a sensationalized murder trial in Florida, on which many people took fierce positions before a speck of evidence was introduced, basing themselves on nothing more than judging those involved by the color of their skin.

We have a long way to go to catch up to what Martin Luther King said 50 years ago. And we are moving in the opposite direction.