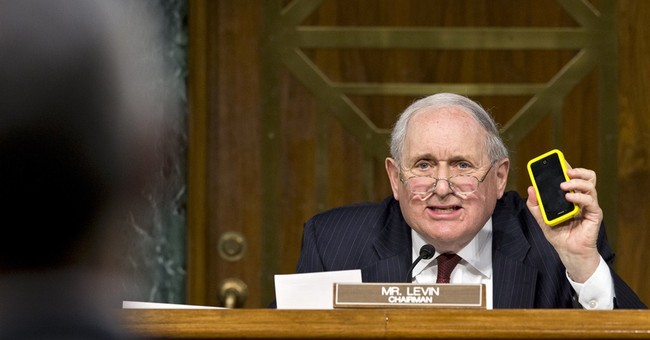 We have truly entered the world of "Alice in Wonderland" when the CEO of a company that pays $16 million a day in taxes is hauled up before a Congressional subcommittee to be denounced on nationwide television for not paying more.

Apple CEO Tim Cook was denounced for contributing to "a worrisome federal deficit," according to Senator Carl Levin -- one of the big-spending liberals in Congress who has had a lot more to do with creating that deficit than any private citizen has.

Because of "gimmicks" used by businesses to reduce their taxes, Senator Levin said, "children across the country won't get early education from Head Start. Needy seniors will go without meals. Fighter jets sit idle on tarmacs because our military lacks the funding to keep pilots trained."

What is a tax "loophole"? It is a provision in the law that allows an individual or an organization to pay less taxes than they would be required to pay otherwise. Since Congress puts these provisions in the law, it is a little much when members of Congress denounce people who use those provisions to reduce their taxes.

If such provisions are bad, then members of Congress should blame themselves and repeal the provisions. Yet words like "gimmicks" and "loopholes" suggest that people are doing something wrong when they don't pay any more taxes than the law requires.

Are people who are buying a home, who deduct the interest they pay on their mortgages when filing their tax returns, using a "gimmick" or a "loophole"? Or are only other people's deductions to be depicted as somehow wrong, while our own are OK?

Supreme Court Justice Oliver Wendell Holmes pointed out long ago that "the very meaning of a line in the law is that you intentionally may go as close to it as you can if you do not pass it."

If the line in tax laws was drawn in the wrong place, Congress can always draw it somewhere else. But, if you buy the argument used by people like Senator Levin, then a state trooper can pull you over on a highway for driving 64 miles per hour in a 65 mile per hour zone, because you are driving too close to the line.

Government's power to bully people who have broken no law is dangerous to all of us. When Attorney General Eric Holder's Justice Department started keeping track of phone calls going to Fox News Channel reporter James Rosen (and his parents) that was firing a shot across the bow of Fox News -- and of any other reporters or networks that dared to criticize the Obama administration.

When the Internal Revenue Service started demanding to know who was donating to conservative organizations that had applied for tax-exempt status, what purpose could that have other than to intimidate people who might otherwise donate to organizations that oppose this administration's political agenda?

The government's power to bully has been used to extract billions of dollars from banks, based on threats to file lawsuits that would automatically cause regulatory agencies to suspend banks' rights to make various ordinary business decisions, until such indefinite time as those lawsuits end. Shakedown artists inside and outside of government have played this lucrative game.

No American government can take away all our freedoms at one time. But a slow and steady erosion of freedom can accomplish the same thing on the installment plan. We have already gone too far down that road. F.A. Hayek called it "the road to serfdom."

How far we continue down that road depends on whether we keep our eye on the ball -- freedom -- or allow ourselves to be distracted by predatory demagogues like Senator Carl Levin.