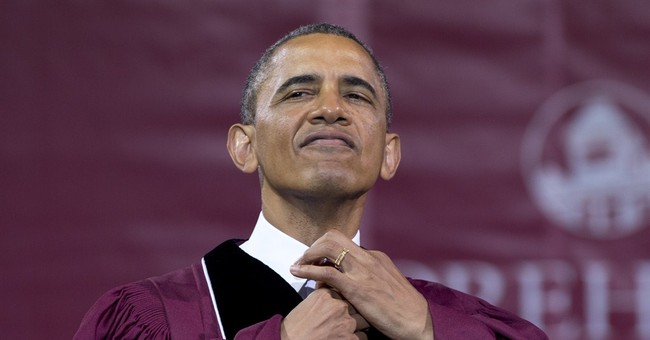 This time of year, as college students return home for the summer, many parents may notice how many politically correct ideas they have acquired on campus. Some of those parents may wonder how they can undo some of the brainwashing that has become so common in what are supposed to be institutions of higher learning.

The strategy used by General Douglas MacArthur so successfully in the Pacific during World War II can be useful in this very different kind of battle. General MacArthur won his victories while minimizing his casualties -- something that is also desirable in clashes of ideas within the family.

Instead of fighting the Japanese for every island stronghold as the Americans advanced toward Japan, MacArthur sent his troops into battle for only those islands that were strategically crucial. In the same spirit, parents who want to bring their brainwashed offspring back to reality need not try to combat every crazy idea they picked up from their politically correct professors. Just demolishing a few crucial beliefs, and exposing what nonsense they are, can deal a blow to the general credibility of the professorial pied pipers.

For example, if the student has been led to join the crusade for more gun control, and thinks that the reason the British have lower murder rates than Americans have is because the Brits have tighter gun control laws, just give him or her a copy of the book "Guns and Violence" by Joyce Lee Malcolm.

As the facts in that book demolish the gun control propaganda fed to students by their professors, that can create a healthy skepticism about other professorial propaganda.

There are other books that can likewise demolish other politically correct beliefs that prevail on campuses. My own recent book, "Intellectuals and Race," has innumerable documented facts that expose the fallacies in most of what is said about racial issues in most college classrooms.

For those students who have bought the campus party line on Third World nations, the classic study of that subject is "Equality, the Third World, and Economic Delusion" by the late P.T. Bauer of the London School of Economics. He made a veritable demolition derby of most of what has been said in politically correct circles about the relationship between rich and poor countries.

For those students who have been conditioned to regard the welfare state as the solution to social problems, there is no book that exposes the actual human consequences of the welfare state more poignantly than "Life at the Bottom" by British physician Theodore Dalrymple. He has worked in both low-income neighborhoods and in prisons, so he has seen it all.

Although Britain is the setting for "Life at the Bottom," Americans will recognize very similar patterns here. Problems found in low-income black ghettoes in the United States are found in low-income white neighborhoods in Britain, where none of the usual excuses about racism, slavery, etc., apply. The only thing that is the same in both countries is the welfare state and its poisonous ideology.

If your student has been led to believe that "comprehensive immigration reform" -- amnesty, in plain English -- is the only way to go, a devastating book titled "Mexifornia," by Victor Davis Hanson, introduces some cold, factual reality into a subject usually discussed in sweeping and lofty rhetoric.

A book that offers a choice between the island-hopping strategy that General MacArthur used in the Pacific and the all-out assault across a broad front that was used by the Allied armies in Europe is titled "The New Leviathan."

It has thirteen penetrating articles by leading authorities on such subjects as national security, ObamaCare, environmentalism, election frauds and more.

However the battle is fought, what is most important is that the battle be fought, since the young are the future, and the propaganda of today can become the government policies of tomorrow.