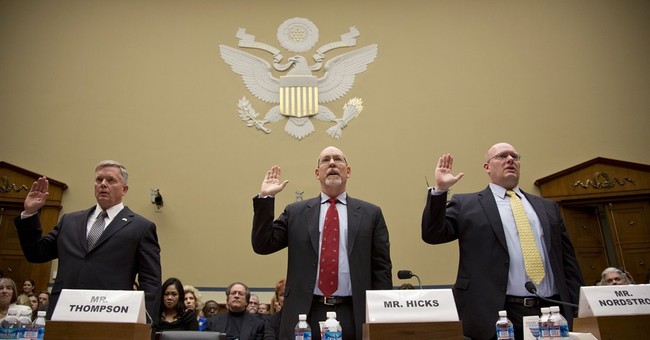 There can be honest differences of opinion on many subjects. But there can also be dishonest differences. Last week's testimony under oath about events in Benghazi on September 11, 2012 makes painfully clear that what the Obama administration told the American people about those events were lies out of whole cloth.

What we were told repeatedly last year by the President of the United States, the Secretary of State, and the American ambassador to the U.N., was that there was a protest demonstration in Benghazi against an anti-Islamic video produced by an American, and that this protest demonstration simply escalated out of control.

This "spontaneous protest" story did not originate in Libya but in Washington. Neither the Americans on duty in Libya during the attack on the consulate in Benghazi, nor officials of the Libyan government, said anything about a protest demonstration.

With lies, as with potato chips, it is hard to stop with just one. After the "spontaneous protest" story was discredited, the next claim was that this was the best information available at the time from intelligence sources.

But that claim cannot survive scrutiny, now that the 12 drafts of the Obama administration's talking points about Benghazi have belatedly come to light. As draft after draft of the talking points were made, e-mails from the State Department pressured the intelligence services to omit from these drafts their clear and unequivocal statement from the outset that this was a terrorist attack.

Attempts to make it seem that Ambassador Susan Rice's false story about a "spontaneous protest" was the result of her not having accurate information from the intelligence services have now been exposed as a second lie to excuse the first lie.

Despite Secretary of State Hillary Clinton's loudly proclaimed question "What difference, at this point, does it make?" the difference is between an honest mistake and a calculated lie to deceive the American people, in order to win an election.

Barack Obama's election campaign oratory had proclaimed the death of Osama bin Laden as an accomplishment of his administration, as part of a general defeat of Al-Qaeda and other terrorists. To admit that these terrorists were still in action, and strong enough to kill an American ambassador and three other Americans in a well-coordinated military style attack, would be a politically devastating admission during the election campaign.

Far better, politically, to come up with a story about a protest demonstration that just got out of hand. This could be presented as an isolated, one-time event, rather than part of a continuing pattern of terrorism by groups that were still active, despite President Obama's spin suggesting that they were not.

The problem with telling a lie, or even a succession of lies, is that a very small dose of the truth can sometimes make the whole thing collapse like a house of cards. The State Department's own foreign service officer Gregory Hicks was in Libya during the attack, so he knew the truth. When threats were not enough to silence him, it was then necessary to try to discredit him.

After years of getting glowing job evaluations, and awards of honors from the State Department for his work in various parts of the world, Mr. Hicks suddenly began to get bad job evaluations and was demoted to a desk job in Washington after he spoke with a Congressman about what he knew. The truth is dangerous to liars.

The Obama administration's excuse for not trying to get help to the Americans in Benghazi while they were under attack -- namely, that it would take too long -- is as shaky as its other statements. A small fighting unit in Tripoli was ready to get on a plane to Benghazi when they were ordered to "stand down." Other fighting units located outside of Libya are designed precisely for fast deployment -- and nobody knew how many hours the attack would last.

But it will take more investigations to determine who gave the order to "stand down," and why. How many new lies that will generate is another question.