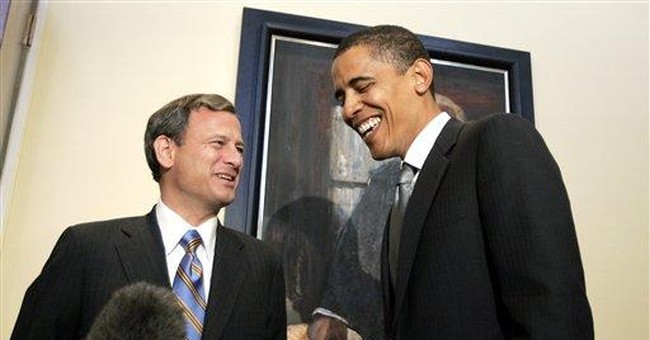 Trending
Betrayal is hard to take, whether in our personal lives or in the political life of the nation. Yet there are people in Washington -- too often, Republicans -- who start living in the Beltway atmosphere, and start forgetting those hundreds of millions of Americans beyond the Beltway who trusted them to do right by them, to use their wisdom instead of their cleverness.

President Bush 41 epitomized these betrayals when he broke his "read my lips, no new taxes" pledge. He paid the price when he quickly went from high approval ratings as president to someone defeated for reelection by a little known governor from Arkansas.

Chief Justice John Roberts need fear no such fate because he has lifetime tenure on the Supreme Court. But conscience can be a more implacable and inescapable punisher -- and should be.

The Chief Justice probably made as good a case as could be made for upholding the constitutionality of ObamaCare by defining one of its key features as a "tax."

The legislation didn't call it a tax and Chief Justice Roberts admitted that this might not be the most "natural" reading of the law. But he fell back on the long-standing principle of judicial interpretation that the courts should not declare a law unconstitutional if it can be reasonably read in a way that would make it constitutional, out of "deference" to the legislative branch of government.

But this question, like so many questions in life, is a matter of degree. How far do you bend over backwards to avoid the obvious, that ObamaCare was an unprecedented extension of federal power over the lives of 300 million Americans today and of generations yet unborn?

These are the people that Chief Justice Roberts betrayed when he declared constitutional something that is nowhere authorized in the Constitution of the United States.

John Roberts is no doubt a brainy man, and that seems to carry a lot of weight among the intelligentsia -- despite glaring lessons from history, showing very brainy men creating everything from absurdities to catastrophes. Few of the great tragedies of history were created by the village idiot, and many by the village genius.

One of the Chief Justice's admirers said that when others are playing checkers, he is playing chess. How much consolation that will be as a footnote to the story of the decline of individual freedom in America, and the wrecking of the best medical care in the world, is another story.

What he did was betray his oath to be faithful to the Constitution of the United States.

Who he betrayed were the hundreds of millions of Americans -- past, present and future -- whole generations in the past who have fought and died for a freedom that he has put in jeopardy, in a moment of intellectual inspiration and moral forgetfulness, 300 million Americans today whose lives are to be regimented by Washington bureaucrats, and generations yet unborn who may never know the individual freedoms that their ancestors took for granted.

Some claim that Chief Justice Roberts did what he did to save the Supreme Court as an institution from the wrath -- and retaliation -- of those in Congress who have been railing against Justices who invalidate the laws they have passed. Many in the media and in academia have joined the shrill chorus of those who claim that the Supreme Court does not show proper "deference" to the legislative branch of government.

Similar reasoning was used back in the 1970s to justify the Federal Reserve's inflationary policies. Otherwise, it was said, Congress would destroy the Fed's independence, as it can also change the courts' jurisdiction. But is it better for an institution to undermine its own independence, and freedom along with it, while forfeiting the trust of the people in the process?