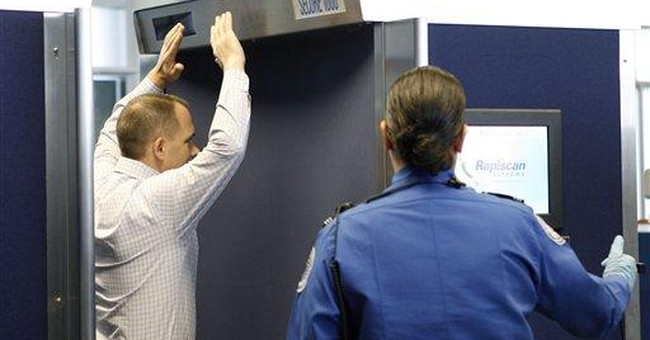 No country has better airport security than Israel-- and no country needs it more, since Israel is the most hated target of Islamic extremist terrorists. Yet, somehow, Israeli airport security people don't have to strip passengers naked electronically or have strangers feeling their private parts.

Does anyone seriously believe that we have better airport security than Israel? Is our security record better than theirs?

"Security" may be the excuse being offered for the outrageous things being done to American air travelers, but the heavy-handed arrogance and contempt for ordinary people that is the hallmark of this administration in other areas is all too painfully apparent in these new and invasive airport procedures.

Can you remember a time when a Cabinet member in a free America boasted of having his "foot on the neck" of some business or when the President of the United States threatened on television to put his foot on another part of some citizens' anatomy?

Yet this and more has happened in the current administration, which is not yet two years old. One Cabinet member warned that there would be "zero tolerance" for "misinformation" when an insurance company said the obvious, that the mandates of ObamaCare would raise costs and therefore raise premiums. Zero tolerance for exercising the First Amendment right of free speech?

More than two centuries ago, Edmund Burke warned about the dangers of new people with new power. This administration, only halfway through its term, has demonstrated that in many ways.

What other administration has had an Attorney General call the American People "cowards"? And refuse to call terrorists Islamic? What other administration has had a Secretary of Homeland Security warn law enforcement officials across the country of security threats from people who are anti-abortion, for federalism or are returning military veterans?

If anything good comes out of the airport "security" outrages, it may be in opening the eyes of more people to the utter contempt that this administration has for the American people.

Those who made excuses for all of candidate Barack Obama's long years of alliances with people who expressed their contempt for this country, and when as president he appointed people with a record of antipathy to American interests and values, may finally get it when they feel some stranger's hand in their crotch.

As for the excuse of "security," this is one of the least security-minded administrations we have had. When hundreds of illegal immigrants from terrorist-sponsoring countries were captured crossing the border from Mexico-- and then released on their own recognizance within the United States, that tells you all you need to know about this administration's concern for security.

When captured terrorists who are not covered by either the Geneva Convention or the Constitution of the United States are nevertheless put on trial in American civilian courts by the Obama Justice Department, that too tells you all you need to know about how concerned they are about national security.

The rules of criminal justice in American courts were not designed for trying terrorists. For one thing, revealing the evidence against them can reveal how our intelligence services got wind of them in the first place, and thereby endanger the lives of people who helped us nab them.

Not a lot of people in other countries, or perhaps even in this country, are going to help us stop terrorists if their role is revealed and their families are exposed to revenge by the terrorists' bloodthirsty comrades.

What do the Israeli airport security people do that American airport security do not do? They profile. They question some individuals for more than half an hour, open up all their luggage and spread the contents on the counter-- and they let others go through with scarcely a word. And it works.

Meanwhile, this administration is so hung up on political correctness that they have turned "profiling" into a bugaboo. They would rather have electronic scanners look under the clothes of nuns than to detain a Jihadist imam for some questioning.

Will America be undermined from within by an administration obsessed with political correctness and intoxicated with the adolescent thrill of exercising its new-found powers? Stay tuned.