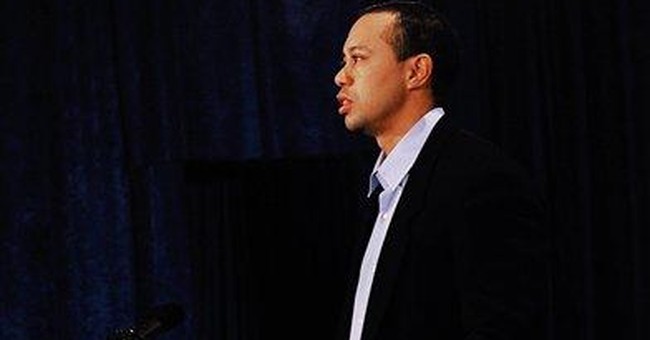 Tiger Woods doesn't owe me an apology. Nothing that he has ever done has cost me a dime nor an hour of sleep.

This is not a plea to be "non-judgmental." I am very judgmental about all sorts of things, including Tiger Woods' bad behavior. But that is very different from saying that he somehow owes me an apology.

For all I know, my neighbors may be judgmental when I drive out of my driveway in a 15-year-old car. But they have never said anything to me about it, and I have never offered them an apology. This is not equating driving a 15-year-old car with what Tiger Woods did. But the point is that any apology he might make should be made to his family, who were hurt, not to the public, who might be disappointed in him, but not really hurt.

Public apologies to people who are not owed any apology have become one of the many signs of the mushy thinking of our times. So are apologies for things that somebody else did.

If someone says to you that he murdered someone near and dear to you, what are you supposed to say? "No problem, we all make mistakes"? Not bloody likely!

Slavery has existed all over the planet for thousands of years, with black, white, yellow and other races being both slaves and enslavers. Does that mean that everybody ought to apologize to everybody else for what their ancestors did? Or are the only people who are supposed to feel guilty the ones who have money that others want to talk them out of?

This craze for aimless apologies is part of a general loss of a sense of personal responsibility in our time. We are supposed to feel guilty for what other people did but there are a thousand cop-outs for what we ourselves did to those we did it to.

Back in the 1960s, when so many foolish ideas flourished simply because they were new, a New York Times columnist tried to make the case that we were all somehow responsible for the assassination of John F. Kennedy.

That was considered to be Deep Stuff. It made you one of the special folks when you believed that, instead of one of the rest of us poor dumb slobs who believed that the man who shot him was responsible.

For more than a century, the intelligentsia have been trying to get us to focus on the "root causes" of crime-- supposedly created by "society"-- instead of locking up thieves or executing murderers.

If some people don't have the money or the achievements of others, that too is society's fault, in the eyes of those for whom personal responsibility is an outmoded idea.

Personal responsibility is a real problem for those who want to collectivize society and take away our power to make our own decisions, transferring that power to third parties like themselves, who imagine themselves to be so much wiser and nobler than the rest of us.

Aimless apologies are just one of the incidental symptoms of an increasing loss of a sense of personal responsibility-- without which a whole society is in jeopardy.

The police cannot possibly maintain law and order by themselves. Millions of people can monitor their own behavior better than any third parties can. Cops can cope with that segment of society who have no sense of personal responsibility, but not if that segment becomes a large part of the whole population.

Yet increasing numbers of educators and the intelligentsia seem to have devoted themselves to undermining or destroying a sense of personal responsibility and making "society" responsible instead. Aimless apologies are just one small symptom of this larger and more dangerous attitude.