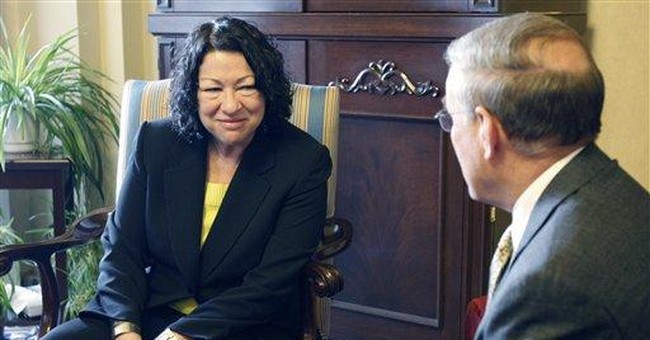 For the fourth time in six cases, the Supreme Court of the United States has reversed a decision for which Judge Sonia Sotomayor voted on the 2nd Circuit Court of Appeals. If this nominee were a white male, would this not raise questions about whether he should be elevated to a court that has found his previous decisions wrong two-thirds of the times when those decisions have been reviewed?

Is no one supposed to ask questions about qualifications, simply because this nominee is Hispanic and a woman? Have we become that mindless?

Qualifications are not simply a question of how long you have been doing something, but how well you have done it. Judge Sotomayor has certainly been on the federal bench long enough, but is being reversed four out of six times a sign of a job well done?

Would longevity be equated with qualifications anywhere else? Some sergeants have been in the army longer than some generals but nobody thinks that is a reason to make those sergeants generals.

Performance matters. And Judge Sotomayor's performance provides no reason for putting her on the Supreme Court.

Longevity is not the only false argument for putting Sonia Sotomayor on the Supreme Court. Another is the argument that "elections have consequences," so that the fact that Barack Obama won last year's elections means that his choice for the Supreme Court should be confirmed. This is a political talking point rather than a serious argument.

Of course elections have consequences. But Senators were also elected, and the Constitution of the United States gives them both the right and the duty to say "yes" or "no" to any president's judicial nominees.

It is painfully appropriate that the case which finally took the Sotomayor nomination beyond the realm of personal biography is one where the key question is how far this country is going to go on the question of racial representation versus individual qualifications.

Within living memory, there was a time when someone who was black could not get certain jobs, regardless of how high that individual's qualifications might be. It outraged the conscience of a nation and aroused people of various races and social backgrounds to rise up against it, sometimes at the risk of their lives.

Many, if not most, thought that they were fighting for equal treatment for all. But, today, too many people seem to think it is just a question of whose ox is gored-- or for whom one has "empathy," which amounts to the same thing in practice.

Too much that Sonia Sotomayor has said and done over the years places her squarely in the camp of those supporting a racial spoils system instead of equal treatment for all. The organizations she has belonged to, as well as the statements she has made repeatedly -- not just an isolated slip of the tongue taken "out of context"-- as well as her dismissing the white firefighters' case that the Supreme Court heard and heeded, all point in the same direction.

Clever people say that none of this matters because Republican Senators don't have enough votes to stop this nominee from being confirmed. But that assumes that every Democrat will vote for her, regardless of what the public thinks. It also assumes that alerting the public doesn't matter, now or for the future.

The standards for judging the nomination of Sonia Sotomayor are not the standards of either the criminal law or the civil law. That is, nothing has to be proven against her "beyond a reasonable doubt" or even by "a preponderance of the evidence."

The New Haven firefighters got their rights, despite Judge Sotomayor, because of a one-vote majority in the Supreme Court, where one vote counts big time. Making Sonia Sotomayor that one vote is a big gamble with the rights of all Americans.