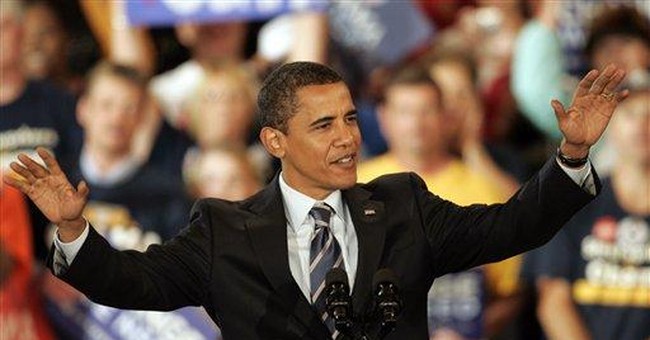 Apparently there is something about Sarah Palin that causes some people to think of her as either the best of candidates or the worst of candidates. She draws enthusiastic crowds and provokes visceral hostility in the media.

The issue that is raised most often is her relative lack of experience and the fact that she would be "a heartbeat away from the presidency" if Senator John McCain were elected. But Barack Obama has even less experience-- none in an executive capacity-- and his would itself be the heartbeat of the presidency if he were elected.

Sarah Palin's record is on the record, while whole years of Barack Obama's life are engulfed in fog, and he has had to explain away one after another of the astounding and vile people he has not merely "associated" with but has had political alliances with, and to whom he has directed the taxpayers' money and other money.

Sarah Palin has had executive experience-- and the White House is the executive branch of government. We don't have to judge her by her rhetoric because she has a record.

We don't know what Barack Obama will actually do because he has actually done very little for which he was personally accountable. Even as a state legislator, he voted "present" innumerable times instead of taking a stand one way or the other on tough issues.

"Clean up the mess in Washington"? He was part of the mess in Chicago and lined up with the Daley machine against reformers.

He is also part of the mess in Washington, not only with numerous earmarks, but also as the Senate's second largest recipient of money from Fannie Mae, and someone whose campaign has this year sought the advice of disgraced former Fannie Mae CEO Franklin Raines, who was at the heart of the subprime crisis.

Why then the enthusiasm for Obama and the hostility to Sarah Palin in the media?

One reason of course is that Senator Obama is ideologically much closer to the views of the media than is Governor Palin. But there is more than that. There are other conservative politicians who do not evoke such anger, spite and hate.

Sarah Palin is the one real outsider among the four candidates for the presidency and vice-presidency on the Republican and Democratic tickets. Her whole career has been spent outside the Washington Beltway.

More than that, her whole life has been outside the realm familiar to the intelligentsia of the media. She didn't go to the big-name colleges and imbibe the heady atmosphere that leaves so many feeling that they are special folks. She doesn't talk the way they talk or think the way they think.

Worse yet, from the media's perspective, Sarah Palin does not seek their Good Housekeeping seal of approval.

Much is made of Senator Joe Biden's "experience." But Frederick the Great said that experience matters only when valid conclusions are drawn from it.

Senator Biden's "experience" has been a long history of being on the wrong side of issue after issue in foreign policy. He was one of those Senators who voted to pull the plug on financial aid to South Vietnam, which was still defending itself from Communist invaders after the pullout of American troops.

Sarah Palin will not be ready to become President of the United States on the first day that she and John McCain take office. Nobody is.

But being Vice President is a job that can allow a lot of time for studying, and everything about Governor Palin's career says that she is a bright gal with her head on straight. The country needs that far more than it needs people with glib answers to media "gotcha" questions.

Whatever the shortcomings of John McCain and Sarah Palin, they are people whose values are the values of this nation, whose loyalty and dedication to this country's fundamental institutions are beyond question because they have not spent decades working with people who hate America. Nor are they people whose judgments have been proved wrong consistently during decades of Beltway "experience."