A Bridge Too Far Gone 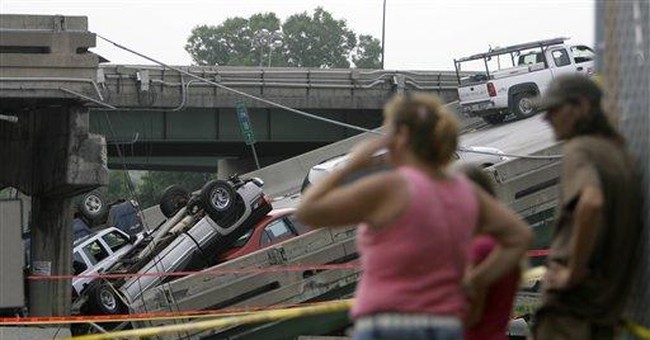 It took a collapsing bridge in Minnesota to alert people across the country to the fact that many other bridges in many other places have been allowed to deteriorate without adequate maintenance.

If this were just a matter of poor political leadership at various levels of government, we could at least hope for better leaders in the future. But the problem goes deeper than that.

It is not just the people but the incentives that are responsible for the neglect of infrastructure, while tax money is lavished on all sorts of less urgent projects.

In other words, when there is a complete turnover in political leaders over time, the same problem will remain because the same incentives will remain when new leaders take over.

Some people claim that the problem is how much money it would take to properly maintain bridges, highways, dams and other infrastructure. But money is found for other things, including things far less urgent and some things that are even counterproductive.

The real problem is that the political incentives are to spend the taxpayers' money on things that will enhance politicians' chances of getting re-elected.

There may be enough money available to maintain bridges and other infrastructure but that same money can have a bigger political pay-off if spent building something new instead of maintaining and repairing existing structures.

When money is spent building a new community center, a golf course, or anything that will be newsworthy, there will be ribbon-cutting ceremonies and the politicians who cut the ribbons can expect to see their pictures in the newspapers and on TV.

All that keeps their name before the public in a positive role and therefore enhances their prospects of being re-elected.

But there are no ribbon-cutting ceremonies when bridges are being repaired or pot-holes are being filled in. These latter activities may be more valuable than a community center or a golf course, but they are not nearly as photogenic.

The preference for showy projects that will enhance a politician's career prospects is not peculiar to current politicians. Adam Smith pointed out the same thing about politicians in 18th-century Europe.

We can vote the rascals out but the new rascals who replace them will face the same incentives and in all likelihood will respond in the same way.

A pattern that has persisted for more than two centuries is likely to continue unless something fundamental is changed.

What really needs to be done is to change the incentives.

How would that change the incentives?

A company that has to get the money to build and maintain bridges or other infrastructure through the voluntary actions of people in the financial markets, instead of being able to extract money from the taxpayers, is going to find financiers a lot more finicky about what is being done with their money. People who are putting their own money on the line are going to want to have their own experts taking a look under the bridges they finance, to see where there are rust, cracks or crumbling supports.

When people know that the lawsuits that are sure to follow after a bridge collapses are going to drain millions of dollars of their own money -- not the taxpayers' money -- that keeps the mind focussed.

Those who like to think of the government as the public interest personified may be horrified at the idea of turning a governmental function over to private enterprise.

Politicians who want to hang onto sources of patronage and power will of course encourage people to look at things that way. But the track record of privately run infrastructure will compare favorably with government-run infrastructure.

But that is only if we stop to compare -- and to think.