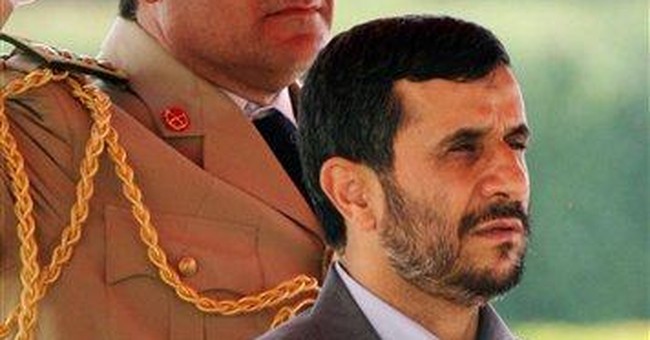 "Moral paralysis" is a term that has been used to describe the inaction of France, England and other European democracies in the 1930s, as they watched Hitler build up the military forces that he later used to attack them.

It is a term that may be painfully relevant to our own times.

Back in the 1930s, the governments of the democratic countries knew what Hitler was doing -- and they knew that they had enough military superiority at that point to stop his military buildup in its tracks. But they did nothing to stop him.

Instead, they turned to what is still the magic mantra today -- "negotiations."

No leader of a democratic nation was ever more popular than British Prime Minister Neville Chamberlain -- wildly cheered in the House of Commons by opposition parties as well as his own -- when he returned from negotiations in Munich in 1938, waving an agreement and declaring that it meant "peace in our time."

We know now how short that time was. Less than a year later, World War II began in Europe and spread across the planet, killing tens of millions of people and reducing many cities to rubble in Europe and Asia.

Looking back after that war, Winston Churchill said, "There was never a war in all history easier to prevent by timely action." The earlier it was done, the less it would have cost.

At one point, Hitler could have been stopped in his tracks "without the firing of a single shot," Churchill said.

That point came in 1936 -- three years before World War II began -- when Hitler sent troops into the Rhineland, in violation of two international treaties.

At that point, France alone was so much more powerful than Germany that the German generals had secret orders to retreat immediately at the first sign of French intervention.

As Hitler himself confided, the Germans would have had to retreat "with our tail between our legs," because they did not yet have enough military force to put up even a token resistance.

Why did the French not act and spare themselves and the world the years of horror that Hitler's aggressions would bring? The French had the means but not the will.

"Moral paralysis" came from many things. The death of a million French soldiers in the First World War and disillusionment with the peace that followed cast a pall over a whole generation.

Pacifism became vogue among the intelligentsia and spread into educational institutions. As early as 1932, Winston Churchill said: "France, though armed to the teeth, is pacifist to the core."

It was morally paralyzed.

History may be interesting but it is the present and the future that pose the crucial question: Is America today the France of yesterday?

We know that Iran is moving swiftly toward nuclear weapons while the United Nations is moving slowly -- or not at all -- toward doing anything to stop them.

It is a sign of our irresponsible Utopianism that anyone would even expect the UN to do anything that would make any real difference.

The Iranian leaders are not going to stop unless they get stopped. And, like Hitler, they don't think we have the guts to stop them.

Incidentally, Hitler made some of the best anti-war statements of the 1930s. He knew that this was what the Western democracies wanted to hear -- and that it would keep them morally paralyzed while he continued building up his military machine to attack them.

Iranian leaders today make only the most token and transparent claims that they are building "peaceful" nuclear facilities -- in one of the biggest oil-producing countries in the world, which has no need for nuclear power to generate electricity.

Nuclear weapons in the hands of Iran and its international terrorist allies will be a worst threat than Hitler ever was. But, before that happens, the big question is: Are we France? Are we morally paralyzed, perhaps fatally?