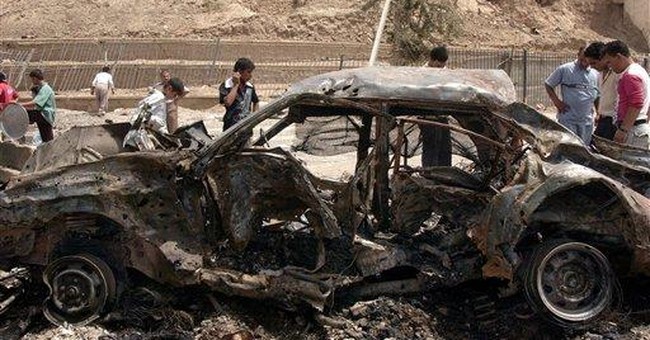 "And then what?" That is the question which should be asked of those who are demanding that we pull out of Iraq now.

No candid answer should be expected from cynical politicians like Senate Majority Leader Harry Reid, who have their bets riding big time on an American defeat in Iraq, as their ticket to winning the 2008 elections.

But that question should be answered by those who honestly and sincerely think that a troop pullout is the answer to the Iraq problem. What do they think will happen if we do?

That question is studiously avoided by those in politics and the media who urge pulling out.

Those who deal in talking points may believe, or claim to believe, that there will be no further repercussions. But those who have to confront the real world know that pulling out now is a formula for a bigger disaster than anything that has already happened in Iraq.

Nobody has ever wanted that. Our whole history shows that American troops have repeatedly pulled out of countries around the world when wars ended and enough order was restored to turn the country over to its own people.

The political conflict today is between people who think that pulling out should depend on conditions in Iraq, as those conditions unfold, rather than on arbitrary timetables created by politicians with no military experience, and with a time horizon that extends no further than the 2008 elections.

Those who say that the Iraq war has nothing to do with the war on terror seem not to notice that the terrorists themselves obviously think otherwise.

Terrorists are pouring men and military equipment into Iraq, with the help of Iran, and using suicide bombers there for some reason.

Terrorists recognize the high stakes in the outcome of this war, even if growing numbers of people over here refuse to.

But how many countries will continue to cooperate with the United States when they know that the terrorists are in this for the long haul, while the U.S. can abandon them to their fate at any moment, whenever it becomes politically expedient at home?

Terrorist or Iranian control of Iraq would give them enormous leverage with other countries in the Middle East, putting control of the oil that is the lifeblood of Western economies in the hands of implacable and ruthless enemies.

With more resources to finance more international terrorism, does anyone think the terrorists will spare the United States?

Much has been made of how long we have already stayed in Iraq, the casualties, and the mistakes that have been made. But both deaths and mistakes have always been inseparable from war.

As for how long we have been in Iraq, the cost of a war is not measured in time. It is measured in lives lost.

While our media are impatiently waiting for the 4,000th American death in Iraq that they can trumpet, and rub our noses in -- in the name of "honoring the troops" -- we need to understand that casualty rates in Iraq are low, as wars go.

If and when that 4,000th American death in Iraq is reached, we need to recall that more Marines than that were lost taking one island in the Pacific during World War II.

During the Civil War, more than twice as many Union soldiers as that were killed -- in one day -- at the battle of Shiloh, and again at Gettysburg.

The "war on terror" is a misleading phrase. It is the terrorists' war against us -- and it is not something that we can unilaterally call off. Our only choice is where to fight it, over there or over here.