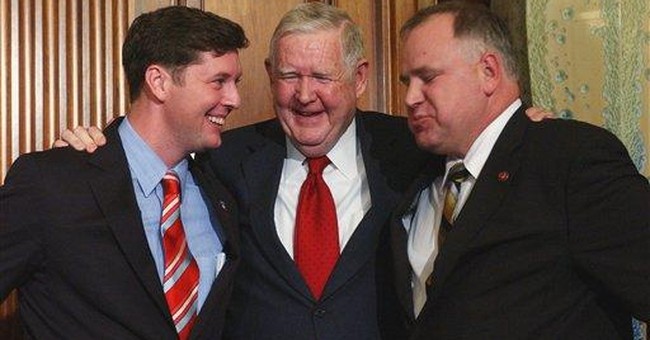 One of the dangers in being a demagogue is that some of your own supporters -- those who take you literally -- can turn against you when you start letting your actions be influenced by realities, instead of following the logic of your ringing rhetoric.

That is what seems to be happening to House Speaker Nancy Pelosi and other liberal Democrats in Congress.

Anti-war protesters in Washington and outside her home in San Francisco are denouncing Pelosi and other Congressional Democrats for not cutting off the money to fight the war in Iraq.

If the war in Iraq is such an unnecessary and futile expenditure of blood and treasure as Pelosi et al. have been saying, why not put an end to it?

But to do that would mean taking responsibility for the consequences -- and those consequences would be disastrous and lasting. They would probably still be lasting when the 2008 elections come around.

The Democrats cannot risk that. They have taken over Congress by a very clever and very disciplined strategy of constantly criticizing the Republicans, without taking the risk of presenting an alternative for whose results they can be held responsible.

There is no sign that they want to change that politically winning strategy now. Their non-binding resolutions against the war are a perfect expression of that strategy.

These resolutions put them on record as being against the war without taking the responsibility for ending it.

Unfortunately for the Congressional Democrats, their left-wing supporters have taken the anti-war rhetoric of Pelosi, Murtha, et al., at face value and consider it a betrayal that they talk the talk but will not walk the walk.

It has been painfully clear that Speaker Pelosi was serious only about scoring political points. Her big grin when she won a narrow vote for a non-binding resolution was grotesque against the background of a life-and-death issue.

You don't grin over a political ploy that you have pulled when men's lives are at stake.

It is not just Congressional politicians who are so preoccupied with scoring points against the administration that they show no sign of concern for what the actual consequences of their words or actions will be for troops in the field, nations in the Middle East, or the global war on terror.

Much of the media is similarly caught up in scoring points on Iraq. For example, the cover of the March 18th issue of the New York Times magazine section featured a story about women in the military who said that they had been raped in Iraq.

A week later, they had to print a correction, after discovering that one of these women had not even been to Iraq. But any unsubstantiated charge against the American military rates headline coverage, even if there is no space for anything positive in Iraq.

There is apparently no space even to assess the extent to which the increase of American troop strength in Iraq has reduced the deaths of our troops from terrorist attacks. Nor is there apparently much space to discuss the implications of the return of Iraqis from the less violent provinces to their homes in Baghdad.

Indeed, there has apparently never been any space to discuss the fact that most provinces in Iraq have not had the levels of violence featured day in and day out in the media.

The demagoguery of the Democrats has already put them in the position where a successful conclusion of the Iraq war before the 2008 elections can be a political disaster for them.

If the recent increase in the number of troops in Iraq, and their freer hand in dealing with the terrorists there, reduces the level of violence enough to stabilize Iraq enough for American troops to start coming home before the 2008 elections, the Democrats will have lost their gamble.

Only an American defeat in Iraq can ensure the Democrats' political victory next year. Their only strategy is to sabotage the chances for a military victory in Iraq without being held responsible for a defeat.

That is the corner that they have painted themselves into with their demagoguery that even their own supporters see through.