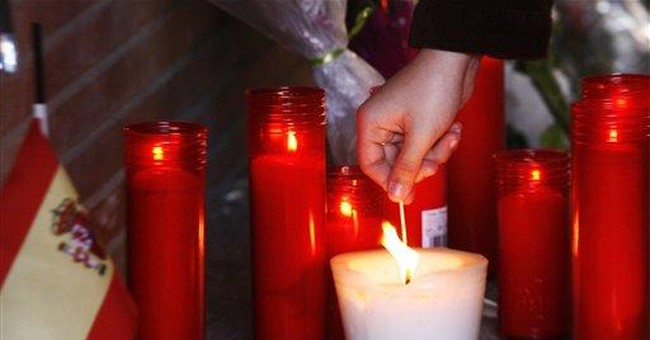 The front cover of Newsweek's March 5th issue featured a woman with amputated legs and a sweatshirt that said "ARMY" across the front. Inside, there were pages and pages of other pictures of badly wounded and disfigured military veterans, in a long article that began under the big headline: "Forgotten Heroes."

The utter hypocrisy of all this can be seen in the word "heroes." There have been many acts of heroism among our troops in Iraq -- but those heroes didn't make the front cover of Newsweek.

One man fell on a grenade to protect his buddies, smothering the fatal blast with his body, so that those around him might live when he died. But that never made the front cover of Newsweek. It was barely mentioned anywhere in the liberal media.

The Newsweek hypocrisy is not unique. It has been the rule, not the exception, as much of the mainstream media has devoted itself to filtering and spinning the news out of Iraq.

Parading casualties is called "honoring our troops." But what does it mean to honor someone? When we gather at a memorial service to honor someone in death or at a ceremony to award prizes to them while they are alive, what do we do?

Talk about "supporting the troops" or "honoring the dead" is part of the general corruption of language for political purposes. It is like saying "I take full responsibility," when all that this phrase really means is: "You have caught me red-handed and there is no way to deny it, so I will just use these words to try to dissipate your anger and escape punishment."

After generations of dumbed-down education in our schools, perhaps it is inevitable that there would be large numbers of people who have no way of separating rhetoric from reality.

The reality is that many of those in the media and in politics who are constantly talking about "supporting our troops" or "honoring our troops" have for years been in the forefront of those criticizing or undermining the military, long before the Iraq war.

During the early stages of that war, men fighting for their lives were criticized for not protecting the contents of an Iraqi museum.

Unsubstantiated charges against American military personnel create instant front-page news stories in the New York Times. But innumerable things that our troops have done that would make us proud are not likely to be reported at all.

It was front-page news in the March 4th New York Times when a young soldier said goodbye to her father before heading off to Iraq.

It was front-page news in the New York Times when some reservists had financial problems when they had to leave their civilian jobs after being called to active duty in Iraq.

Anything negative, no matter how commonplace, can make the front page of the New York Times, while even remarkable acts of bravery or compassion are passed over in silence.

Activists are creating displays in which a small American flag is planted for every death in Iraq. For some of these activists, it may be the first time they have ever touched an American flag, unless they were burning it.

Perhaps the most irresponsible act of all has been Congress's promotion of a non-binding resolution against the recent increase in American troop strength in Iraq.

People's opinions can differ on troop deployment, even if -- like House Speaker Nancy Pelosi -- they have never deployed troops in their lives and have no military experience whatsoever.

But if anyone in Congress is serious about stopping the war, they can simply cut off the money -- and take responsibility for the consequences that follow.

Instead, they want to have it both ways, passing a non-binding resolution whose only effect is to embolden our enemies and undermine the morale of our troops that they keep saying they are "supporting."