Each year about this time, some parents write in to ask for suggestions of things for their children to read during the summer, in order to counteract the steady diet of liberal-left indoctrination they have been getting in schools and colleges.

This year there is a new book that is almost tailor-made for that purpose. Its title is "Conservative Comebacks to Liberal Lies" by Gregory Jackson. In it, all sorts of political and media spin are shot to pieces by hard facts.

If you think that the Constitution of the United States provides for "separation of church and state," that George W. Bush is not as smart as either Al Gore or John Kerry, or that the big-money donors to political campaigns give more to the Republicans than to the Democrats, this book provides documented facts showing the opposite.

The book goes literally from A to Z, with 26 chapters covering subjects from abortion to zealots who are terrorists.

Some of the facts cited are historical facts and some are statistical. Among the historical facts is that there is absolutely nothing in the Constitution about a "separation of church and state," despite how often that phrase has been repeated in the media, in politics, and even in courts of law.

Over the years, liberal judges have twisted the First Amendment's phrase about "free exercise of religion" to mean the opposite -- that you are not free to exercise your religion if atheists or members of non-Christian religions say that they are offended.

Whatever the best social policy might be as regards Christmas displays or the use of vouchers in parochial schools, none of this is banned by the Constitution. Some judges, however, use the Constitution as a blank check, authorizing them to ban whatever they don't like and call it Constitutional law. 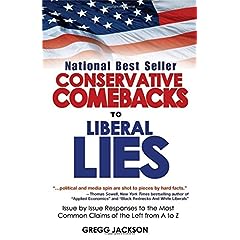 President Bush, like Ronald Reagan before him and innumerable others who are out of favor among liberals, has repeatedly been depicted as such a mental lightweight that he is not in the same league with brilliant guys like Al Gore and John Kerry.

The fact is that George W. Bush and John Kerry both went to Yale, where Bush had a higher grade-point average. Bush also scored higher than Kerry on intelligence tests that both took in the military. Gore went to Harvard, where he finished in the bottom fifth of his class two years in a row.

Grades and test scores are not everything. But they are something -- and those who are convinced that their guys are way smarter have no hard facts at all to back up this widely and fervently believed notion.

The grand political fallacy of the age is that the Republicans are the party of wealth, while the Democrats are the party of compassion for the little guy. This is something that has been assumed and repeated so often that it has become a "well-known fact" without any hard evidence being asked for or given.

It has become axiomatic in the liberal media that big-money donors give most of that big money to the Republicans. But the hard data show that the top ten donors to political campaigns gave far more to the Democrats, with the lone exception being the National Association of Realtors, who gave 50 percent to the Democrats and 49 percent to the Republicans.

"Racism" is the trump card in the indictment of Republicans. But the cold fact is that the whole Jim Crow era in the South was dominated by Democrats. A higher percentage of Republicans than Democrats voted for civil rights legislation.

Bill Clinton's cabinet consisted overwhelmingly of white males while Bush's cabinet has been the most ethnically diverse in history.

But who cares about facts any more?