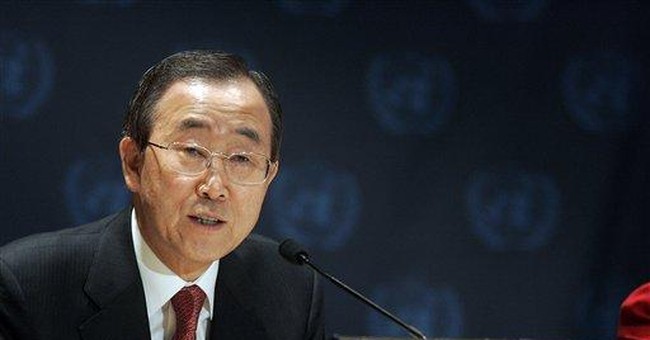 I suppose its still too early to put new UN Secretary-General Ban Ki-moon in the same underclass as Kofi Annan. Kofi was as anti-American as they come, but the new UN boss is showing symptoms of AAD – American Appreciation Disorder – which afflicts most of the bureaucracy at Turtle Bay.

In his first week on the job, there was a hint of hope that Ban might be different. When he was asked to comment on the execution of Saddam Hussein, Ban was supposed to offer an unequivocal denunciation of the death penalty in all forms and circumstances, for that is what the catechism of global justice requires. But Ban Ki-moon, who only weeks before had served as foreign minister of a sovereign state and whose instincts were to protect national prerogatives, had not yet been fully indoctrinated into the intricacies of global governance. Thus, he surprised and angered his powder blue brethren when he said of Saddam's hanging, that the "issue of capital punishment is for each and every member state to decide."

International power brokers at the United Nations put Ban into emergency sensitivity training. In less than a week, UN staffers were pleading with Iraqi officials not to make the same mistake with two other officials of Saddam Hussein's government that had been sentenced to death. When punishing Barzan Ibrahim and Awad Hamed al-Bandar for the mass killing of Shites in 1982, the UN asked the Iraqi government to show "restraint."

Now, only one month on the job, Ban has come full circle. During a recent trip to Brussels Ban Ki-moon spoke of "a growing tendency to see some phase-out of the death penalty," and went on to endorse the idea saying, "I encourage that that trend."

In the United States, capital punishment is one of those issues that raises the blood pressure of advocates on either side of the debate. We have, and will continue, to debate its utility as part of our criminal justice system. At present, Americans want to retain for their prosecutors and juries the option of death as a just sentence for certain crimes. Three times as many states in the U.S. (38-12) retain the death penalty than those that have abolished it. Ban Ki-moon is on the wrong side of the American people.

But the United Nations will try to change that. Last week, the European Union approved a measure calling for a global moratorium on the death penalty and they are taking their case to the UN General Assembly where it is likely to be adopted. The full apparatus of the UN will then begin a global campaign to influence nations to "see the light" and change their evil ways.

Ban made sure of that when he appointed Asha-Rose Migiro as Deputy Secretary-General. Shortly after she took office, Migiro said, "scrapping of death penalty is not an individual state wish but one of UN policies because it contravenes UN principles of humanity, human rights and equality. I will help my superior ensure that all member states implement the policy."

As with other issues, the billions of dollars U.S. taxpayers send to the UN will be used against them to lobby on an issue on which they have clearly spoken.

And Ban Ki-moon has not limited his international law and order lectures to capital punishment. The Secretary-General recently stated that "the prison at Guantanamo should be closed," allying himself with left wing critics like Cindy Sheehan and Congressman Jack Murtha who want to shutter the terrorist detention facility.

Nearly 400 al Qaeda and Taliban terrorists are being detained at Gitmo, which has come under protest from Kofi Annan and the United Nations in various forms since it opened in 2002. Last summer the UN Human Rights Commission issued a report condemning allegations of torture of detainees held there. They did so despite the fact that none of the authors of the report accepted a U.S. invitation to visit the Guantanamo Bay prison.

When it comes to lecturing the United States on the death penalty and Gitmo, Ban Ki-moon has adopted much of the rhetoric of his predecessor Kofi Annan. He has also aligned himself with Annan and John Kerry on the "global test" and favors expansion of the Security Council which would dilute American influence. Time will tell, but so far it seems that at the UN, the new boss is the same as the old boss.