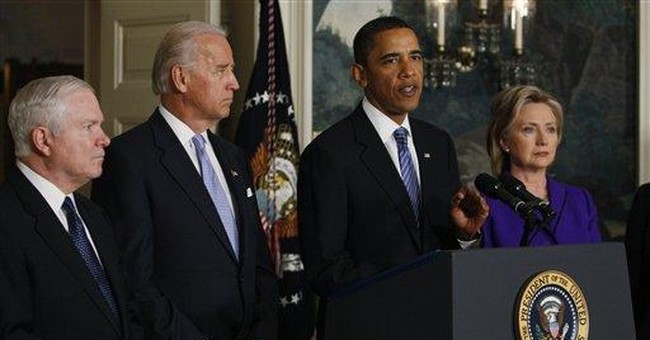 Do you think America needs a vibrant economy with a private sector that can compete in today’s global economy or a bigger government that has to take more from citizens to feed its expanding entitlements? Do you want to earn your own American Dream or do you want to be dependent upon government giving you the same dream as everyone else? Do you want a job or endless government handouts? It’s time for choices, because America’s wakeup call is just beginning.

The lead statements from one day’s newspaper headlines speak to the depth of the problems America faces: “Austerity ahead…more economic pain…gripped by uncertainty…brace for a year of stubbornly high unemployment…inevitable layoffs…foreclosures on the rise…high debt…a sputtering housing market.” Have you had enough?

Robert Arnott, Research Affiliates chief, said for Fortune: “Fiscal discipline has been largely lacking at all levels, creating a debt burden far beyond historical precedent. If you factor in Social Security, Medicare, state and local debt, and what Fannie Mae and Freddie Mac owe, our total public debt is now at 141% of GDP. Add in household and corporate debt, and the unfunded portion of entitlement programs, and it’s 840% of GDP.”

Future demographic changes just make matters worse! Arnott warns, “In 2002, the U.S. was adding 10 new working-age people for every senior citizen. By 2023, that flips to 10 new retiree wannabes for each new working-age person.”

President Obama’s excuse: “The road to recovery is never straight.” Predictably, he suggests more tax credits to create 17,000 “green” jobs. He’s fiddling with government stimulus funds while America’s economy continues to flounder. By not even trying to be bipartisan, for failing to honor his promise of transparency and for over-speaking to the point of irritation, President Obama is more a liability than a leader. Instead of recognizing the “Dead End” warnings and changing course, Democrats are picking up speed toward the cliff ahead! In the words of former Laker announcer Chick Hearn, “The mustard is coming off the hot dog.”

The President’s aggressive liberal agenda, reckless spending and the growing anger, uncertainty and fear it has created may be a gift in disguise. Americans are realizing that liberal policies and programs sound good but don’t work. You can’t keep printing and borrowing more money without eventually paying the bill. With the additional funds required to fund the “nanny state” programs Democrats want to raise, business entrepreneurs know the grim tax reaper is waiting if and when they do succeed.

Last year, Americans voted for anyone but Bush; now, more and more Americans are “mad as hell” and want anyone but Obama. With mid-term elections on the horizon, the heat is on. Many Democrats are turning to retirement rather than face the voters’ rath. If Scott Brown even comes close to winning the election for the U.S. Senate in Massachusetts, it will prove that even more Americans are seeing the light.

People want jobs, but punishing the people who create private-sector jobs with higher taxes and oppressive regulations kills economic growth. FDR’s New Deal was a raw deal that kept unemployment well over ten percent for over a decade. Reagan was right: “Government doesn't fix the problem, government IS the problem.”

Don’t confuse my focus on looming problems with pessimism about America’s future. Optimists are realists who face problems. They’ve overcome adversity in the past, and they have confidence that they can do it again. Just as America turned from Carter to Reagan when inflation skyrocketed and our economy struggled, I’m optimistic that America will return to the principles and freedoms that made her great.

Join the chorus of voices calling for an end to their stimulus packages, wasteful spending and budget-busting healthcare plan. Let Washington know that we don’t want more government entitlements, when we can’t afford the ones we have. Tell them to stop propping up losing entities “too big to fail.” Let failing companies, states, counties and cities go bankrupt and restructure to find a way to survive on their own. It’s time to once again reward innovation, service, and achievement instead of punishing the very people who can create economic vitality and the jobs America needs!