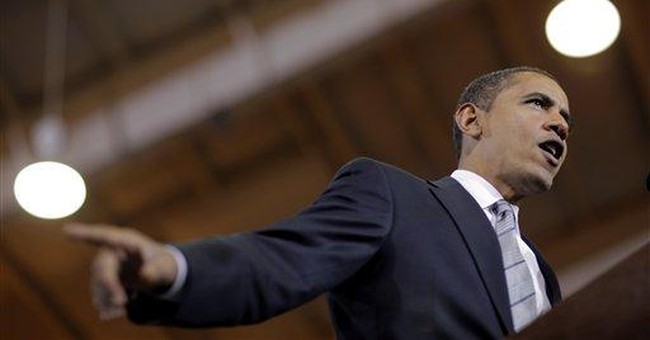 Barack Obama doesn't need a costume to scare me! No matter how he tries to disguise his positions as a moderate, these quotes are enough to raise the hair on the back of any American’s neck.

"If you’re going to be in the way of change, get out of the way – we’re pushing you aside. Very politely of course. That’s how we win elections."

This candid and stunning revelation of Obama’s aggressive game plan was reported by Jonathan Last in The Weekly Standard. Dr. Edward Tryon, a CUNY Emeritus Professor, commented on Obama’s plan: "Obama’s self-portrayal as a unifier, ready to 'reach across the aisle' and heal the 'divisive bitterness' of our 'one United States of America' is a ploy." Obama’s view of uniting Americans is to "push" all Americans to agree with his liberal agenda. He intends to push aside anyone perceived as "in the way of change."

Obama, commenting at a rally in Elko, NV, urged aggressive campaign tactics. Is "getting in someone's face" a civil method of persuasion? It’s no wonder that so many Obama supporters have taken their hate of anything Republican to an extreme. David Limbaugh noted that Obama’s candidacy is inspiring certain youths to perform paramilitary drills in his honor, public officials to threaten criminal prosecution of those who criticize him, and attorneys purporting to be working for his campaign systematically to intimidate local election officials. In West Hollywood, his supporters are hanging Sarah Palin in effigy for a Halloween display. His promise to unite seems to involve shutting up or intimidating people who disagree with him.

"The Supreme Court never ventured into the areas of redistribution of wealth and sort of more basic issues of social and economic justice in this society. And to that extent, as radical as I think people tried to characterize the Warren Court, it wasn’t that radical. It didn’t break free from the essential constraints that were placed by the founding fathers in the Constitution. … Generally, the Constitution is a charter of negative liberties. It says what the states can’t do to you. It says what the federal government can’t do to you. But it doesn’t state what the state or federal government must do on your behalf."

Obama's answer to "Joe the Plummer" about his desire to "share the wealth" is obviously not new. Obama, as a law professor, discussed the Supreme Court's role in redistribution of wealth to African Americans during a 2001 radio interview on WBEZ.FM. He went on to call for legislative change in support of redistribution. He talked about the challenges to initiate such redistributive change in the courts, but there is no question that he supports "redistributing wealth." It's clear that Obama supports a radical, European model of socialism that will radically increase the size of the U.S. government.

"I taught constitutional law for 10 years, and . . . when you look at what makes a great Supreme Court justice, it's not just the particular issue and how they rule, but it's their conception of the Court. And part of the role of the Court is that it is going to protect people who may be vulnerable in the political process, the outsider, the minority, those who are vulnerable, those who don't have a lot of clout."

With the opportunity to appoint as many as three Supreme Court Judges during the next four years, Barack Obama’s comment in a November primary identifies the kind of Justice he would want to nominate to the Supreme Court. His twisted misconception about a Judge's role suggests that judges should not uphold the Constitution but actively work to change it on the basis of what their hearts dictate!

"You will not have a better Senator under any circumstances."

This quote be radical Islamist Rashid Khalidi mentioned by the LA Times in Peter Wallsten's article, "Allies of Palestinians see a friend in Barack Obama," will have to do, because the LA Times refuses to release a video of Khalidi's going-away party in 2003, where this controversial Islamic scholar lavished praise on Obama, telling the mostly Palestinian American crowd that the state senator deserved their help in winning a U.S. Senate seat. The LA Times' journalistic malfeasance in hiding from the public the video of Obama’s comments at the event since April shows how the media is in the tank for Obama.

"First, I'll stop spending $9 billion a month in Iraq. I'm the only major candidate who opposed this war from the beginning. And as president I will end it. … I will cut investments in unproven missile defense systems. … I will set a goal of a world without nuclear weapons. To seek that goal, I will not develop new nuclear weapons; I will seek a global ban on the production of fissile material; and I will negotiate with Russia to take our ICBMs off hair-trigger alert, and to achieve deep cuts in our nuclear arsenals."

This concise statement of Obama's defense priorities was provided in a video for Caucus4Priorities in October of 2007. Our Founding Fathers enshrined in our Constitution our government's commitment to "provide for the common defense" designating the President as the "Commander in Chief." Do Obama’s priorities suggest that he is ready to defend and preserve our country? Even Senator Biden has noted that Obama's perceived weakness will be provocative to our enemies.

"…just because you have an individual right does not mean that the state and local government cannot constrain that right…."

Barack Obama, at a 2008 primary debate in Philadelphia, let people know just how he felt about gun rights! The NRA reports that, in the past, Obama has endorsed a ban on all hand guns and voted in the Illinois Senate to allow the prosecution of people who use a firearm for self-defense in their homes. He could become the most anti-gun president in American history.

"They come here to work. If we have registered them, if they have paid a fine, if they are learning English and going to the back of the line, if we fix our legal immigration system, then we will not have this problem of undocumented workers in this country, because people will be able to actually go on a pathway to citizenship."

At a 2008 Democratic debate in Los Angeles before Super Tuesday voting, Barack Obama described his approach to illegal immigrants. Turning "illegals" into "legals" is just another way Obama plans to secure another special-interest voting block for the Democratic Party.

"I've got two daughters, 9 years old and 6 years old. I am going to teach them first of all about values and morals. But if they make a mistake, I don't want them punished with a baby."

Barack Obama's comments at a campaign stop in Pennsylvania send a chill down the spine of pro-life advocates. He's a strong abortion advocate who views laws protecting unborn children as "punishing" pregnant women by forcing them to give birth to the baby instead of taking the child's life through abortion.

"Putting a price on carbon is the most important step we can to take to reduce emissions. As president, my first priority to combat global warming will be enacting an economy-wide cap on U.S. carbon emissions that will reduce U.S. emissions by the amount scientists agree is necessary (80%) for the U.S. to bear an equitable share of the global emissions reduction burden."

Barack Obama, going on record for the League of Conservation, promises to put the brakes on our economy at a time we need growth, not more green regulations based on contested research. Global warming may be real, but there is little agreement that man is the cause or that new controls will make a difference.

"I was able to see faith as more than just a comfort to the weary or a hedge against death, but rather as an active, palpable agent in the world."

Obama described why he was drawn to an activist church like Trinity in a 2006 article on the United Church of Christ's Web site. It's clear that Reverend Jeremiah Wright, Obama's self-professed spiritual mentor, is an activist. Even if he didn’t agree with Wright's nuttier theories like the possibility of AIDS being created by the US government as a genocidal weapon against blacks or that Louis Farrakhan is one of the great figures of 20th century history, Obama still stayed in Wright's church to build an activist political base in Chicago.

"And it's not surprising then that they get bitter, they cling to guns or religion or antipathy to people who aren't like them or anti-immigrant sentiment or anti-trade sentiment as a way to explain their frustrations."

Barack Obama's comments at an April fundraiser in San Francisco describing his difficulty with winning over working-class voters in Pennsylvania were very revealing of his elitist attitudes. He pretends to connect understand and to care about the middle class, but he obviously fails to respect many of its members.

Since Barack Obama has no real record or experience to know how he will lead, we are left to study his frightening words hidden behind his campaign eloquence. When Obama comes to your door with Pelosi and Reid at his side asking for your vote and says, "Trick or treat," let him know that you’re on to their liberal "tricks" and you don't consider what they plan to do with America any kind of "treat!" Let him know that you've giving your vote to a team you can trust—John McCain and Sarah Palin!