Why America’s Best Option for President is John McCain 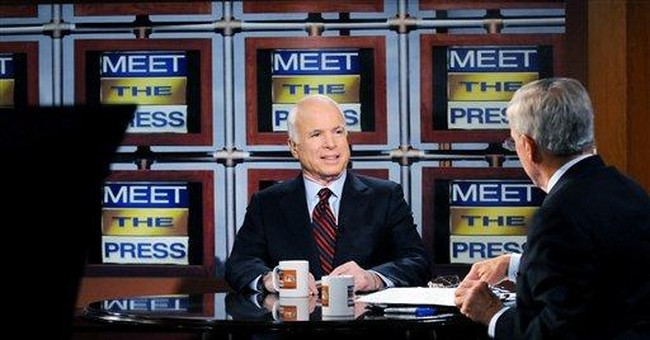 If you or others you know still have doubts on Obama’s readiness to lead, here are reasons to make Senator John McCain your choice for president:

In one word—Trust! His ‘Straight Talk Express” is more than a slogan. He promised to join Obama in taking public funds; only McCain kept his promise. When Senator Biden talks of our enemies testing a President Obama’s strength, we know past enemies have already tested McCain as a POW. He passed with flying colors. You can trust McCain to do what he believes is right for the country-- “I’d rather lose an election than lose a war!” He has the maturity, integrity and proven character that only experience can affirm.

With the world facing the worst economic challenge in decades, McCain’s plan to reduce corporate taxes will keep more companies here, encourage economic growth and generate more American jobs. Only Hoover and Carter increased taxes as a cure for a bad economy; it made matters worse. While Obama wants to transfer wealth from the very Americans who fund capital investment and economic growth, McCain promises to keep the Bush tax cuts that helped our economy and jobs rebound after 9/11. McCain pledges to keep taxes low on all and raise them on none.

McCain’s energy independence plan is an “all of the above” plan—Drill and Diversify Now! It’s a call for action—he’d free states to allow off-shore exploration and drilling, encourage more clean-coal, speed processing and approval for more nuclear energy plants and refineries, and incentivize without subsidizing alternative energy innovation. That means jobs and a change you can believe in.

McCain complains, “Government has grown by 60 percent in the last eight years. That is simply inexcusable.” He promises to reclaim “our good name as the party of spending restraint.” He’s promised a “top-to-bottom” review of federal spending and promised to veto any bill that earmarks money to pet projects of members of Congress. In addition to eliminating government waste, he wants government to shrink, not grow.

In a dangerous world where we finally have the extremists on the run in Iraq and the Iraqi leaders beginning to make progress, John McCain’s vision for peace through victory makes room for a strong, necessary commitment and the flexibility to adjust strategy as needed! McCain remains the president most Americans would want called at 3 AM to deal with an international crisis!

McCain is a proven maverick who has put America first in taking on his own party leadership. While the Congressional Quarterly's Voting Studies indicate that he voted with Bush as much as 95% in 2007, he voted as low as 77 percent in 2005. Americans have seen his independence in action; he’s no Bush clone.

McCain does more than talk about being a “uniter:” He has delivered—McCain-Feingold on campaign finance, McCain-Lieberman on Global Warming, and the McCain-Edwards-Kennedy Patient Bill of Rights. Bill Clinton said this of John McCain, “He loves his country every bit as much as we do. As a Senator, he has shown his independence of right-wing orthodoxy on some very important issues.”

McCain is a proven reformer committed to taking on corruption wherever it appears. In 2005, while Obama was collecting contributions from PAC groups and leaders associated Freddie Mac and Fannie Mae, McCain co-sponsored legislation that called for more scrutiny and controls. McCain has promised investigations into business executives and Washington insiders who profited while citizens and investors took the fall.

To McCain, Americans don’t need renegotiated trade agreements or protection from competition; they just need freedom to compete in a free-trade, global economy! Americans can out-invent and out-perform anyone in a fair global competition. Obama’s plan to renegotiate NAFTA and increase tariffs will only increase our economic difficulties; McCain supports our longstanding commitment to free enterprise!

If you think healthcare is expensive now, wait until it’s managed by the government. McCain’s plan for healthcare takes the responsibility and choices away from the government and employers and gives it to every American adding portable policies they own, tax credits and saving account options.

He’s also promised to pick Supreme Court Justices in line with Roberts and Alito. That same wisdom is shown in his bold selection of his kindred spirit, Governor Sarah Palin as VP. Palin brings her dynamic presence, her passion for reform, and her energy and executive experience onto his administrative team!

Finally, instead fueling class envy and using the government to “spread the wealth around,” McCain believes in “equal rights” and equal opportunity. His optimism is based on his trust in you, American citizens, not bigger government. He’s committed to preserving the “American Dream” based on personal freedom and individual responsibility no matter what a person’s race, gender or age. Instead of glamorizing the victimhood of the “middle class,” he supports enabling, celebrating and learning from true achievement to make all Americans more successful! McCain trusts us. Now, it’s our turn to trust him to lead.