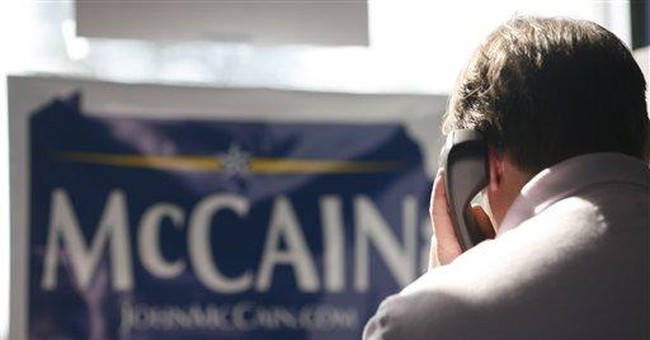 Pope John XXIII once confessed what I'm sure all of our leaders in Washington are feeling, "Sometimes I awake at night and begin to think about a serious problem and decide that I must tell the Pope about it. Then I wake up completely and remember that I am the Pope!" We expect our leaders to have all the answers and label them as failures if they don't. Fortunately, America is not built on belief in wise kings, but in belief in one another-"We the people" of this great country.

At the 1992 Republican Convention, President Ronald Reagan revealed the secret to his success, "I appealed to your best hopes, not your worst fears, to your confidence, rather than your doubts." When facing tough times, this leader's rock-solid confidence in Americans came through when he'd speak from the White House: "I'm not taking your time this evening to ask you to trust me. Instead, I ask you to trust yourself. That is what America is all about. It's the power of millions of people like you who will determine what will make America great again."

Today, as an American, you face important choices. Keeping one eye on the stock markets and another on our leaders in Washington, you worry about our future. Your choices will be driven by one of two basic reactions--panic or trust. By panicking and liquidating your savings or investments, you help push even more institutions to the brink. That, in turn, puts more businesses and jobs at risk.

There are no safe havens for your money if America's financial system fails. The money isn't in any vault; money is in motion making capital and payments available to exchange for the products and services we all need. We've been told by our leaders and the media that we're on a precipice of economic calamity. In response, our leaders have begun investing billions of public dollars in addressing the problem, but there's been no quick rally or recovery. Is a great depression the only answer?

Take time today to view on YouTube "The Bailey Building and Loan Bank Run" scene from Frank Capra's classic film, "It's A Wonderful Life." George Bailey, played by Jimmy Stewart, faces citizens who have lost faith in the financial system. In panic, they descend on the bank, demanding cash.

In response to their panic, George explains how loans work: "No, but you... you... you're thinking of this place all wrong. As if I had the money back in a safe. The money's not here. Your money's in Joe's house.(to one of the men)...right next to yours. And in the Kennedy house, and Mrs. Macklin's house, and a hundred others. Why, you're lending them the money to build, and then, they're going to pay it back to you as best they can. Now what are you going to do? Foreclose on them?"

Still giving in to their panic, many considered settling by taking pennies on the dollar for their deposits from a competing bank, Mary, George's new bride, holding up their honeymoon money, shouts, "How much do you need?" The depositors turned around and, together, chose to keep their deposits in the Bailey Building and Loan taking only what they needed until stability could return. The institution and the people who invested in it survived by choosing to trust and by living out their shared commitment to the common good of the community.

Washington politicians can't turn this alone. If Americans don't believe in the future we can create together, it'll keep falling. Washington can print the money, but we're the ones who give it value by our actions and economic decisions.

No matter what the politicians and pundits warn, there's much to value! Money is still being used to buy goods and services. Selective loans are being made by many smaller banks. People with the right skills are still being hired by companies taking advantage of market opportunities.

Don't panic; act with confidence instead of fear. Invest your worry in constructive action. Keep working. If out of work, instead of resting in outdated skills, refocus and retool to compete for available jobs or start your own small company. Keep spending on what is necessary. Invest in companies that you still believe will succeed. Save more of what you earn and help your neighbors where you can.

FDR words again ring true, "The only thing to fear is fear itself." We're a resilient people whose optimism has been earned from over 230 years of overcoming obstacles and challenges. As Dennis Prager often suggests, take a coin from your pocket or purse and look at the three core values that define America: "Liberty," "In God We Trust" and "E Pluribus Unum" (out of many one). Today, we must affirm our free-enterprise system and the controls that hold people accountable when they abuse it. We must once again reaffirm our trust in God. Then, we must put that trust into action by resting in God's providence by doing what we can to be part of the answer. God willing, together, we'll be bouncing back from this like we have from past challenges. This is our time to live our trust, not panic.