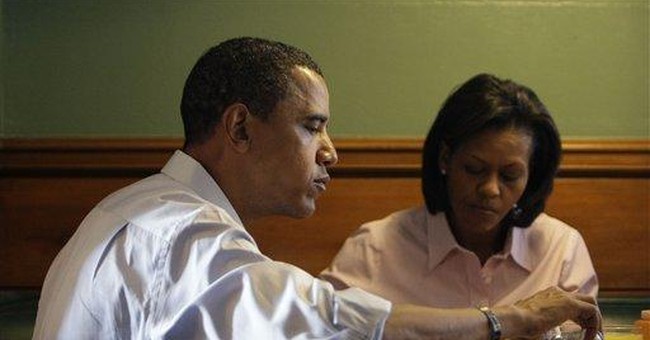 On this Labor Day it’s important to realize that capital investors need skilled labor willing to work and save; labor needs applied capital willing to take a risk on new dreams. Both need a government that will ensure that they will continue to be free to makes dreams happen and to reap the benefits of making those dreams come to life. The American Dream has always worked, and it’s still very much alive. But you wouldn’t know it by listening to the Democratic Party’s Convention.

Speaker after speaker talked of the values and difficult challenges that had shaped the lives of their parents, but then went on to negate those America values by promoting class envy and the same old liberal platform and policies that have failed here and around the world.

Michelle Obama shared with pride, “Both our parents told us that you work for what you want in life.” She acknowledged her inspiring father, Frasier, who, in spite of his MS, put two kids through Princeton and Michelle through Harvard.

Hillary Clinton thanked her mother for telling her, “In this country you can be anything you want to be!” Joe Biden added his parents’ wisdom, “You don’t measure success by whether you’ve been knocked down, but by how quickly you get back up…. I was taught the dignity of work. If you work hard long enough, you can make it.”

And in Obama’s rousing spectacle, he declared: “My grandparents weren’t complainers. They took life as it came. They knew they had to work hard.” He talked about passing on the values he inherited—the values of hard work, honesty, self-reliance, respect for other people, empathy, kindness and faith.

All of these Democrats’ parents had confidence in them, but it’s clear that these Democrats have no such confidence in you. Things are so bad in this “Bush-McCain America” that the only way 95% of Americans can succeed is if they elect “Robin Hood” politicians who will take more from the other 5% of higher-income Americans and more from profitable businesses to give tax breaks, universal healthcare, a college education and mortgage relief to those who Democrats believe can’t make it on their own!

Obama's dream is an American nightmare! Like parents bent on spoiling their children, Democrats no longer believe that hard work, honesty, and self-reliance are enough. Obama complained: “They call this the ownership society. What this really means is that you are on your own…. Pull yourself up by your own bootstraps, even if you don’t have boots, you are on your own…. It’s time for us to change America.”

Punishing economic success never works! That’s truly an “old idea” for such a young “change” candidate. Why are corporations taking jobs overseas? They leave because the tax system, expanded entitlements costs and the bureaucratic regulatory environment punish success. If you want more jobs to leave, enact Obama’s tax plan and fund his expanded entitlements. As humorist P.J. O'Rourke famously said, "If you think health care is expensive now, wait until you see what it costs when it's free."

Our sense of unlimited possibility has been one of the hallmarks of America. Our challenge is to keep it that way. Only a society that allows individuals to develop and use their unique talents will ever reap the benefits of human greatness. The greatest tragedy we face as Americans is the growing number of citizens who no longer believe that they either have those unique skills or any hope of benefiting from them. Every generation must protect and teach the dream or America will die. If the dream dies, envy and dependence are the result.

Sir Alex Fraser Tytler, Scottish jurist and historian writing over 200 years ago on the fall of the Athenian Republic, warned us: "A democracy cannot exist as a permanent form of government. It can only exist until the voters discover that they can vote themselves largesse from the public treasury. From that moment on the majority always votes for the candidates promising the most benefits from the public treasury, with the result that a democracy always collapses over a loose fiscal policy, always followed by a dictatorship. The average age of the world's greatest civilizations has been two hundred years. These nations have progressed through this sequence; from bondage to spiritual faith; from spiritual faith to great courage; from courage to liberty; from liberty to abundance; from abundance to selfishness; from selfishness to complacency; from complacency to apathy; from apathy to dependence; from dependency back again into bondage."

Many in America worry about the gap between the rich and the poor as if the success of the rich takes money from the poor. That is not how capitalism works. The charity of the poor might best be expressed by wishing the rich well as they invest their wealth to create jobs and new opportunities. As a result, many of their aspiring and motivated employees work hard to save, then to invest and ultimately work to become entrepreneurs or owners of capital who create their own wealth. These new "capitalists" launch new entrepreneurial companies that fuel new opportunities for new workers to keep the dream alive.

Michelle Obama focused on your election decision: “I think about how one day, they (Malia and Sasha) will have families of their own. And one day, they—and your sons and daughters—will tell their children about what we did in this election.” Yes, it’s your choice—an inexperienced Barack Obama and his Washington insider or McCain/Palin, two proven maverick reformers who have a track record of making political change work!