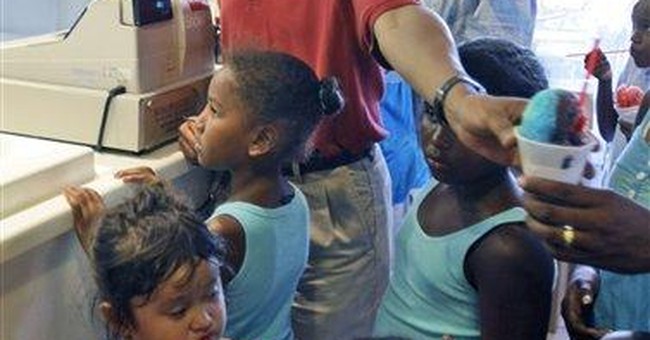 Barack Obama has promised to be a uniter and to help Americans bridge their racial barriers. But by claiming that Republicans will be trying to scare voters by suggesting that he "doesn't look like all those other presidents on the dollar bills" or stressing his affirmative action experience and the racial challenges ahead, Obama keeps inserting race into his campaign.

Barack Obama, in a speech at Howard University, highlighted the work yet to be done should he become our next president: “The teenagers and college students who left their homes to march in the streets of Birmingham and Montgomery; the mothers who walked instead of taking the bus after a long day of doing somebody else's laundry and cleaning somebody else's kitchen — they didn't brave fire hoses and Billy clubs so that their grandchildren and their great-grandchildren would still wonder at the beginning of the 21st century whether their vote would be counted; whether their civil rights would be protected by their government; whether justice would be equal and opportunity would be theirs. . . . We have more work to do.”

To be certain, some discrimination and racism still exist. But instead of pointing to the success of the thousands of black Americans who have worked to achieve their own “American Dreams” and using his campaign victory as the presumptive Democratic candidate for president as a sign of what Americans of any race can do, he continues to play to the victim thinking mentality. It’s that same thinking that has kept far too many black Americans enslaved to affirmative action and its premise that they can’t succeed without it.

Contrast Obama’s comments with those of our Secretary of State, Condoleezza Rice: “It was my mother and father, who, despite the fact that I was growing up in Jim Crow Alabama, always had me convinced that I could be President or the United States. They always taught me to just look past the obstacles. Either blast through them, or assume they’re not in your way…. Growing up where I did in Alabama probably gave me a healthier respect for how far we’ve come. I don’t carry anger about that period of time. I think it made me, and people like me, stronger. I just refuse not to be optimistic. You only have one life. And if you spend your entire life seeing obstacles and seeing clouds and assuming everybody’s out to get you, then I think you’re just likely to waste your life, and I’m just not going to do that.”

The black, Harvard sociologist, Orlando Patterson, is quoted in Larry Elder’s The Ten Things You Can’t Say in America: “The sociological truths are that America, while still flawed in its race relations…is now the least racist white-majority society in the world; has a better record of legal protection of minorities than any other society, white or black; offers more opportunities to a greater number of black persons than any other society, including all those of Africa….”

Voting for or against someone because of the color of his skin is a form of racism that should be un-American. The first black President of the United States should earn it the old-fashioned way—by combining experience, leadership acumen with compelling policy priorities that excite the electorate. Barack Obama’s lack of proven leadership experience, his inconsistent policy stands and non-existent legislative track record leaves much to be desired as a president. One’s race and oratory eloquence may win a candidate a few standing ovations and votes, but they’re not the top qualifications needed for the most important job in our country.

Martin Luther King had a dream of a society where the color of citizen’s skin would not matter. It shouldn’t be a central focus of this or any election.

Obama has called for constructive racial dialogue. Unfortunately, he often complains when anyone reacts to any of his racial references or statements. Candidly talking about racial issues doesn’t make you a racist any more than being aware of gender differences makes you a sexist.

Dennis Miller said it well, “I could care less about the color of Barack Obama’s skin, but the thinness of it is starting to wear on me.” If Barack Obama continues to bring up race in this campaign, let’s hope for a thicker skin for all of us and a little less name calling on all sides!