When Football Was Not Violent Enough 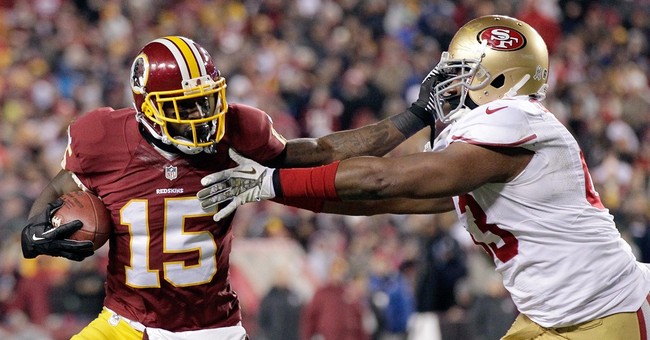 Trending
God may not have invented competitive ball games, but man, endowed with a creative intellect and a passionate spirit, soon discovered such games -- and began re-shaping and refining them until a few generations of inspired collegians, in the decades between the Civil War and World War I, developed the greatest of all ball games, American tackle football.

Parke H. Davis, who played at Princeton in the late 1880s, and who later chronicled the early days of college football in the United States, believed he discovered its earliest antecedent in the Old Testament.

"Beware, the Lord is about to take firm hold of you and hurl you away, you mighty man," says the Book of Isaiah. "He will roll you up tightly like a ball and throw you into a large country."

"It was played on a rectangular field marked with side lines, goal lines and centre line," wrote Davis. "There was no limitation upon the number of players, but these were equally divided between the two sides. The ball was passed forward by a man standing at midfield and the game was in action, the object being to drive the ball by passing, kicking or carrying across the opposite goal line. Its progress was impeded by blocking, holding and tackling, but here the similarity to Rugby ends, as this ancient game was a prolonged scrimmage without order or method."

The ancient Roman version of this game -- harpastum -- rivaled a less vigorous sport called follis. The German scholar W.A. Becker summarized in his 1838 book, "Gallus: Or, Roman Scenes of the Time of Augustus," what was known about these competing games.

"The follis, the great but light ball, or ballon, was struck by the fist or arm," wrote Becker. "The game did not require any very severe exertion, on which account Martial says: 'Ite procul juvenes; mitis mihi convenit aetas/Folle decet pueros ludere, folle senes.'"

This has been translated: "Retire to a distance, young men; tender age suits me; with the bladder it befits only boys and old men to play."

This was not true of the other Augustan game. "The harpastum was unquestionably a more severe exercise," wrote Becker.

"It would seem that human nature was not so different in 28 B.C. from what it is today, for among the first acts of Augustus after settling his right to succeed his great uncle, Julius Caesar, was to demand a revision of the football rules," wrote Parke Davis. "Augustus's grievance against the existing games, however, was their gentleness, which he considered too childish for Roman youths destined to be centurions and commanders of legions."

Those who followed in the spirit of Augustus in developing football as it was played in Medieval and Renaissance Britain succeeded too well in purging it of gentleness.

Montague Shearman in his 1887 book "Athletics and Football" examined some criminal records from the reign of Elizabeth I.

A Middlesex grand jury reported that "unknown malefactors to the number of one hundred assembled themselves unlawfully and playd a certain unlawful game called foote-ball, by means of which unlawful game there was amongst them a great affray likely to result in homicides and serious accidents."

A few years later, again in Middlesex, a coroner's inquisition concluded that "Nicholas Martyn and Richard Turvey, both late of Southemyms, were on the 3rd instant between 3 and 4 p.m. playing with other persons at foote-ball ... when said Roger Ludford and a certain Simon Maltus, of sd parish, yomen, came to the ground, and that Roger Ludford cried out, 'Cast him over the hedge,' indicating that he meant Nicholas Martin, who replied, 'Come thou and do yt.' That thereupon Roger Ludforde ran towards the ball with the intention to kick it, whereupon Nicholas Martyn with the fore-part of his right arm and Richard Turvey with the fore-part of his left arm struck Roger Ludforde on the fore-part of the body under the breast, giving him a mortal blow and concussion of which he died within a quarter of an hour, and that Nicholas and Richard in this manner feloniously slew the said Roger."

Montague related the fruitless efforts of earlier British monarchs to banish football from their realm. In 1389, for example, Richard II prohibited "all playing at tennise, football and other such importune games." In the mid-1400s, James III of Scotland declared that "footballe and golfe be utterly cryed down and not to be used."

In 1531, Sir Thomas Elyot published "The Boke Named the Governour," which the Encyclopedia Britannica describes as "a plan for the upbringing of gentlemen's sons who were to bear authority in the realm." It condemned "foote balle" as a game "wherin is nothinge but beastly furie and exstreme violence; wherof procedeth hurte, and consequently rancour and malice do remaine with them that be wounded; wherfore it is to be put in perpetuall silence."

But football was not silenced. It was refashioned again at English prep schools and transplanted to America, where it was transformed into a game that rewarded strategic acumen and physical courage while discouraging dangerous conduct.

It is a part of our heritage worthy of preserving and protecting and, where possible, perfecting even further.