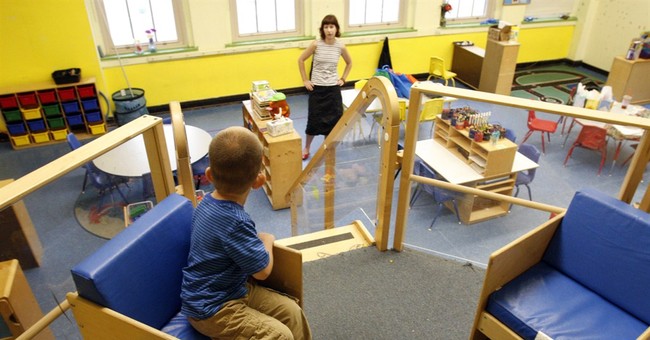 Trending
There are three cousins, each born in the same year in the same town. Two are females named June and Jane, one is a male named Jim.

June goes to college, earns a degree, gets married, buys a house with her husband, has four kids -- and at the age of 32 goes back into the workforce, holding down two part-time jobs to help pay the family's property taxes and tuition bills.

Jane graduates from high school but not college, gets married but is almost immediately divorced and has one illegitimate child. She drops out of the workforce in her 20s and never returns. She collects food stamps and enrolls in Medicaid.

Jim does not graduate from high school, but eventually gets a GED. He worked part-time jobs occasionally in the past. But now he is on disability because of a mood disorder -- which he treats by smoking medical marijuana. As far as he knows, he has no children.

The truth is America must become more hospitable to June if we want to survive as a free and prosperous country.

The Congressional Budget Office issued a report last fall examining the slow rate of growth in the U.S. economy following the last recession.

It concluded that the single most significant factor now limiting America's potential economic growth is the declining growth of the potential labor force -- which has recently increased at only half the rate it did in the years following World War II.

"In several earlier recoveries, the baby boomers were entering the labor force; now, they are beginning to retire," said CBO.

"Another important development is an end to the long-standing increase in women's participation in the labor force, which had boosted the growth of the labor force in recoveries before 2000," said CBO.

To put it plainly: The Baby Boom generation did not have enough babies to keep America's economy growing as vigorously as it did in the past, and women today are less inclined to enter the labor force than they were a decade ago.

In fact, the employment figures released this week showed that the percentage of non-institutionalized women over the age of 16 who participated in the labor force (meaning they had a job or were seeking one) dropped in September to 57.1 percent, a rate it also hit this March, but was otherwise a 24-year low.

In January 1948, when the Bureau of Labor Statistics first started tracking female participation in the U.S. labor force, it was only 32.0 percent. It peaked at 60.3 percent in April 2000, and since then has been trending down.

The U.S. government has been setting records in recent years for the number of people on food stamps and Medicaid, like Jane, and the number of people on disability, like Jim. Yet, even while the overall labor force participation rate for women has declined, married mothers with children, like June, are more likely to work than their unmarried peers.

Women like June contribute to our economy in two ways: They work and create wealth now, and they raise children who can create wealth in the future.

Yet, one wonders how many of them wish the U.S. economy was more like 1948, when it was easier for married mothers to stay home with their children if they wanted, when real GDP grew at 4.1 percent, and when their cousins could not act like Jane and Jim because redistributionist politicians had not yet started the food stamp, Medicaid and disability programs.