Will Boehner Protect Even His Own Religious Liberty? 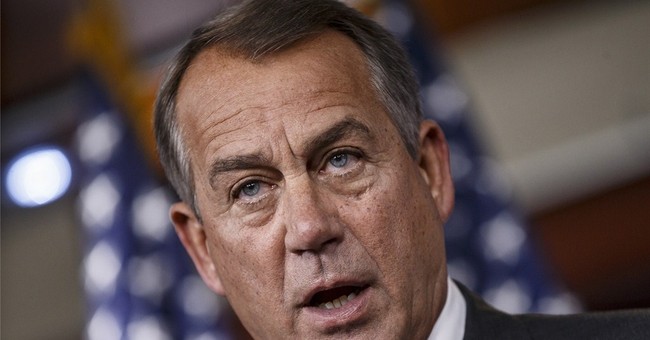 Six months ago, Cardinal Sean O'Malley of Boston made a very simple and straightforward request to House Speaker John Boehner and other members of the House of Representatives.

"I urge you to support H.R. 940 and to help incorporate its policy into upcoming 'must-pass' legislation," O'Malley said in a March 8 letter to all House members.

H.R. 940 advances a proposition you might expect any decent person to embrace -- and it does so by making a small amendment to the Patient Protection and Affordable Care Act, aka Obamacare.

Similar language in H.R. 940 also protects employers and health-insurance issuers from being forced to buy or provide coverage for items or services to which they have a "moral or religious objection."

H.R. 940 mirrors the first words in the Bill of Rights, which say: "Congress shall make no law respecting an establishment of religion, or prohibiting the free exercise thereof."

To object to H.R. 940, a person must argue that the federal government has the moral and constitutional authority to force Americans to act against the teachings of their religion and the dictates of their conscience.

To defend H.R. 940, a person need only argue it is wrong for the government to force Americans to act against their religion or the conscience.

Yet, President Barack Obama and his bureaucratic subordinates are effectively doing just that by pushing forward with a regulation that will require all health care plans (except those bought directly by actual churches and their immediate auxiliaries) to cover sterilizations, contraceptives and abortion-inducing drugs.

The Catholic Church teaches that all three of these things are intrinsically immoral -- and that abortion is the deliberate taking of an innocent human life, a form of murder.

If Obama succeeds in enforcing a regulation that forces Catholics to buy coverage for sterilization, contraceptives and abortion-inducing drugs, he will have succeeded in outlawing the practice of Catholicism in the United States.

Let me repeat that: Obama will have outlawed the practice of Catholicism in the United States.

Yes, Catholics will still be allowed to receive the sacraments inside their churches -- they will retain what Obama calls the "freedom of worship" -- but they will not be able to legally practice their faith, as God requires them to, in the way they live their entire lives.

Catholics will be forced to defy the government or defy their faith and submit to the government's demand that they do what is morally wrong.

The proper response to this profoundly evil and un-American demand by Obama and his bureaucrats is: Never!

When the Obama administration first issued this regulation against religious freedom, many Catholic bishops said exactly that. "We cannot -- we will not -- comply with this unjust law," they wrote in letters read to their parishioners from the pulpits of their churches.

All of the U.S. bishops -- every one -- approved a statement declaring Obama's regulation an "unjust and illegal mandate."

The bishops unanimously described how this unjust mandate violated the "personal civil rights" of individual Americans.

"The HHS mandate creates still a third class, those with no conscience protection at all: individuals who, in their daily lives, strive constantly to act in accordance with their faith and moral values," said the unanimous bishops. "They, too, face a government mandate to aid in providing 'services' contrary to those values -- whether in their sponsoring of, and payment for, insurance as employers; their payment of insurance premiums as employees; or as insurers themselves -- without even the semblance of an exemption."

It was in this spirit that Cardinal O'Malley, who chairs the bishops' committee on pro-life activities sent his request to Speaker Boehner: Incorporate H.R. 940 "into upcoming 'must-pass' legislation."

The House will consider only two pieces of "must-pass" legislation before Obamacare is fully implemented: The CR to fund the government after Sept. 30, and the legislation that will increase the legal limit on the federal debt.

Rep. Diane Black, R-Tenn., the principal sponsor of H.R. 940 is pushing to have Speaker Boehner incorporate it into one of these two must-pass bills.

"This is an issue that is of great concern to Congressman Black, and she is doing what she can to bring it to the attention of leadership," her spokesman told me. "We have not seen any final proposals on either of these must-pass items but our hope is that H.R. 940 is included."

Since March, this writer has asked Boehner's spokesman Michael Steel on multiple occasions whether the speaker will follow through on Cardinal O'Malley's request and attach H.R. 940 to "must-pass" legislation. Steel has never directly answered.

Now the question is whether Boehner, a Catholic, will protect even his own religious liberty, let alone that of other Americans, against a direct and unambiguous by the Obama administration.