Did Bush-Obama Policies Begin the End of Christianity in Arab Lands? 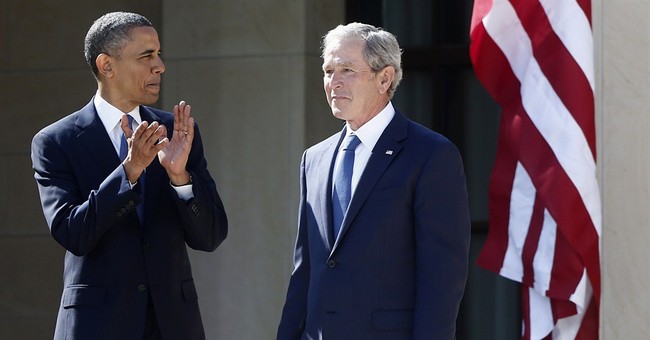 When the despotic King Herod plotted to kill Jesus by sending his agents to slaughter every boy under the age of 2 in and around Bethlehem, an angel appeared to Joseph and told him, "Get up, take the child and his mother, and escape to Egypt."

That, says the Gospel of Matthew, fulfilled what God said through the prophet Hosea: "Out of Egypt I called my son."

Now, two millennia later, we may live in a time when Christians must flee for their lives out of Egypt -- not into it. They do not fear being slaughtered by King Herod, but by the Muslim Brotherhood.

When St. Paul was still persecuting Christians, Jesus struck him down with a bolt of light as he was on the road to Damascus. Paul regained his sight in that city and began his mission of spreading Christianity throughout the world.

Today, Christians fear being struck down on the roads of Syria not by bolts of light, but by Islamist revolutionaries allied with al-Qaida.

In our time, Christianity could be driven from some of the lands where it first took root.

If that dark and epochal moment comes, some of the blame for it must be pinned on the messianic foreign policies pursued by our most recent two presidents, George W. Bush and Barack Obama.

After al-Qaida attacked the United States on Sept. 11, 2001, this nation had a just cause in punishing the perpetrators of those attacks and making sure they could make no further assaults on our homeland. That, of course, required military action in those places where al-Qaida took sanctuary -- particularly Afghanistan.

But George W. Bush had a grander -- and ill-advised -- vision. He thought it was his mission to make it America's mission to literally end tyranny in the world and implant "democracy" everywhere.

He expressed his evangelical zeal for this secular cause in his second inaugural address. "So it is the policy of the United States to seek and support the growth of democratic movements and institutions in every nation and culture, with the ultimate goal of ending tyranny in our world," said Bush.

Obama did not reverse Bush's policy, but added another ill-advised element to it. In promoting democracy in the Middle East, he portrayed the Muslim majorities there as victims of Western colonialism and Cold War policies.

"The relationship between Islam and the West includes centuries of coexistence and cooperation, but also conflict and religious wars," Obama said in a June 2009 speech in Cairo. "More recently, tension has been fed by colonialism that denied rights and opportunities to many Muslims, and a Cold War in which Muslim-majority countries were too often treated as proxies, without regard to their own aspirations."

What has happened in the Middle East during the presidencies of Bush and Obama? Bush went to war in Iraq and then tried to install a representative government there through years of occupation. Obama supported rebellions in Egypt, Libya and Syria.

In Libya, some of the Islamists Obama helped liberate from Moammar Gadhafi turned around and attacked a State Department mission and a CIA compound, murdering four of our people. In Iraq, Syria and Egypt, Christians now face potentially existential struggles.

According to the 2013 report from the U.S. Commission on International Religious Freedom, "The government of Iraq continues to tolerate systematic, ongoing and egregious religious freedom violations, including violent, religiously motivated attacks."

Christians and other religious minorities, says the commission, "have fled the country in recent years, threatening these communities' continued existence in Iraq."

The State Department's 2012 report on religious freedom said that "due to emigration as Christian flee the country," Syria's Christians may have dropped from 10 percent of that nation's population to about 8 percent.

The Central Intelligence Agency estimates 10 percent of Egyptians are Christians. But with their systematic attacks on Christian churches, Egyptian Islamists are now sending a message to Christians who still live in that land where Jesus once lived: Get out.

The Bush-Obama policies were rooted in two great errors. Their job was not to change other nations, but to protect the liberty, security and prosperity of this nation. And the greatness of this nation has ultimately been rooted not merely in the admittedly felicitous form of our government, but in the popular embrace of moral truths -- expressly taught by millennia of Judeo-Christian tradition -- that make all freedom possible.