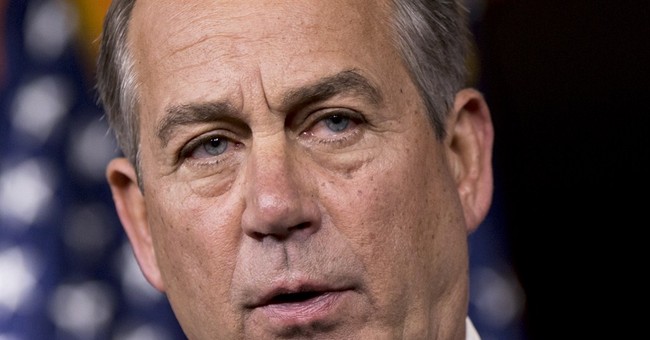 How would you react if House Speaker John Boehner, R-Ohio, ordered you to pay for health-insurance plans that provide abortions?

Or ordered you to give President Barack Obama the money he needs to implement a regulation that forces Christians to act against their faith?

Or cut a deal with Obama to give Obama the money to enforce Obamacare's dictatorial health-insurance mandate on individuals -- but not on big businesses?

Would you consider Boehner a good conservative? A good Republican? A leader who stands with courage in defense of liberty?

The truth is Boehner has already cut deals with Obama that made you pay for the initial implementation of Obamacare.

After Congress narrowly passed Obamacare in 2010, that year's midterm election became a referendum on the law. Backed by the grass-roots activism of the tea party movement, Republicans won control of the House. John Boehner replaced Nancy Pelosi as speaker.

When the new Congress was seated in 2011, the government was funded by a continuing resolution (CR) that expired on March 18 of that year. Because the Constitution says that "no money shall be drawn from the Treasury but in consequence of appropriations made by law," Boehner's Republican House had a veto over what the Obama administration would be able to spend money on after that date.

Representatives Steve King, R-Iowa, and Michele Bachmann, R-Minn., joined by other House conservatives, called on Boehner to put language in the March 2011 CR to prohibit funding for implementation of Obamacare.

Boehner would not do it. Instead, the Republican House passed its first in a series of government-funding deals permitting implementation.

Boehner might have hoped that someone would save him from having to battle Obama over Obamacare. Maybe Chief Justice John Roberts and the Supreme Court would declare it unconstitutional. Maybe former Massachusetts Gov. Mitt Romney would get elected president, and the Republicans would win a filibuster-proof supermajority in the Senate, and Romney would sign legislation repealing it -- even though, as governor, he had signed legislation creating a statewide version of it.

But neither Roberts nor Romney came to Boehner's rescue. So, Obama and his bureaucrats used the money Boehner's House gave them to implement Obamacare -- as they saw fit.

They issued the regulation requiring most health plans to cover sterilizations, artificial contraceptives and abortion-inducing drugs -- thus violating the First Amendment by forcing Christians to act against their faith.

Obama unilaterally suspended the provision in the law that requires large employers to buy health insurance for their workers or pay a penalty. He thus violated the president's constitutional mandate to "take care that the laws be faithfully executed."

As of Jan. 1, when the individual mandate takes effect, a family of four making up to $94,200 (400 percent of the federal poverty level) will qualify for a federal subsidy when purchasing an Obamacare-mandated health-insurance policy on a government-run exchange.

Those taxpayer-funded subsidies can be used to buy health-insurance plans that cover abortions.

Yet all this can be stopped. Sen. Mike Lee, R-Utah, is now urging the same plan King and Bachmann urged two years ago: Prohibit all funding for Obamacare in the next CR.

In a recent interview, Lee told me he was urging House Republicans to pass a CR that defunds Obamacare. He said he will propose a defunding amendment to any CR that comes up in the Senate.

"Republicans in the Senate and Republicans in the House need to stand on this issue, need to refuse to budge," Lee said, "because we will be complicit in Obamacare, we will be responsible for what happens to the country with Obamacare, as the government selectively enforces this law, as the administration has now rewritten it, if we provide funding for the administration to do that."

At a press conference last week, Boehner was asked about Lee's plan. "We have not made any decisions about how we're going to deal with the CR," said Boehner.

Mike Lee is emerging as a new leader in the cause of liberty. John Boehner appears to be cowering again.