Disabled Nation: Small Fraction Leave Disability Because They Work or Get Better 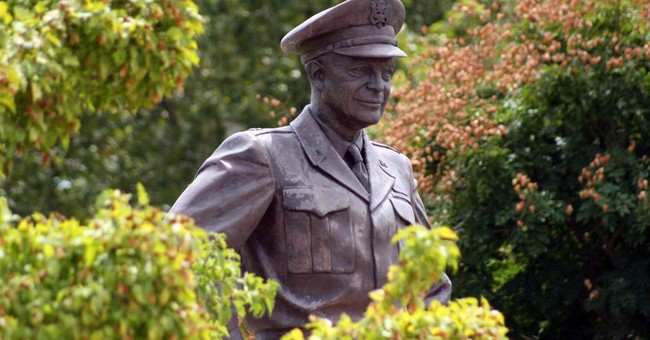 When President Dwight Eisenhower -- a big-government Republican running for re-election -- signed the federal disability program into law in 1956, he suggested this new form of welfare would increase government efficiency, rehabilitate the truly disabled and roll back government dependency.

"We will, of course, endeavor to administer the disability provisions efficiently and effectively, in cooperation with the states," he said. "I also pledge increasing emphasis on efforts to rehabilitate the disabled so that they may return to useful employment."

In fact, the disability program predictably became a one-way street to government dependency -- a street that gets wider, better paved and more heavily trafficked every year.

According to the program's latest annual statistical report, which covers 2011, only approximately 0.7 percent of the people on disability that year managed to get off the program because their condition improved or they returned to work and made too much money to still qualify for benefits.

In 2011, 8,575,544 workers took federal disability benefits, and 653,877 saw their benefits terminated. Among those whose benefits were terminated, the largest group was the 338,222 who reached the federal retirement age and started collecting Social Security instead of disability. The second-largest was the 235,734 who died. The government terminated 39,813 workers from disability in 2011 because they went back to work and earned too much money, 23,271 because their medical condition had improved and 16 -- that's right, 16 -- for what the Social Security Administration called "miscellaneous" reasons. These 16 included those who "did not comply with alcohol or drug abuse treatment programs or who refused vocational rehabilitation services."

The combined total of 63,100 terminated from disability in 2011 because they went back to work, got better or were among the 16 in the "miscellaneous" category, equaled approximately 0.7 percent of the 8,575,544 workers on disability that year.

Between 1776 and the early 1950s, Americans built a great nation without a single person collecting a single dime of federal disability benefits.

But what has happened to America since Eisenhower signed his law? We have become a disabled nation. The total number of U.S. disability beneficiaries now exceeds the total population of Greece.

What exactly has forced all these Americans to stop working and start taking checks from the government? Well, the largest categories were those with bad backs, bad ligaments and bad moods. Of the 8,575,544 "workers" in 2011 collecting disability, 2,488,374 -- or 29 percent -- did not work because of problems with their "musculoskeletal system and connective tissue." Another 1,304,851 -- or 15.2 percent -- did not work because they had a "mood disorder."

The declining ratio of full-time workers to disabled worker is evidence of a dramatic cultural change. America's work ethic has been replaced by the dependency ethic compounded by the disability ethic.

How much lower can the ratio of full-time workers to disabled workers go? Eventually, even the strongest of backs and hardiest of hearts must buckle and break beneath the ever-expanding burden of the redistributionist state.