Do Three People Have a Right to Marry Each Other? 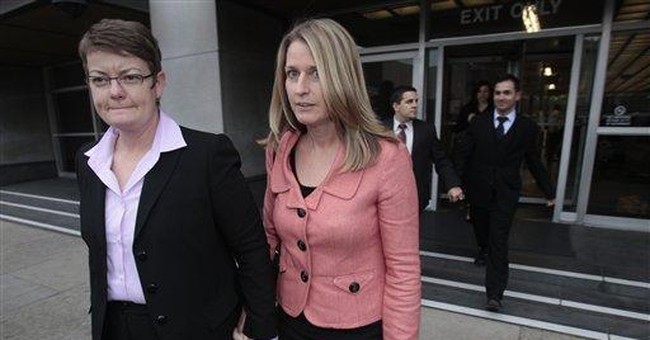 Any inquiry aimed at discovering the nature of marriage must ultimately arrive at one of two conclusions: Either marriage is something with an absolute nature ordained by God and thus unchangeable or it is an artificial thing, created by human beings on their own authority, and thus changeable according to the whims of whatever members of the human race happen to gain the political power needed to define it for the rest of the species.

If the second conclusion is correct, there are no limits at all on what "marriage" could mean.

In the 2008 election, 52 percent of California voters embraced the first conclusion. They approved Proposition 8, an amendment to the state constitution that says marriage is the union of one man and one woman.

After the election, a group called the American Foundation for Equal Rights filed suit in federal court aiming to overturn Proposition 8 on behalf of one homosexual couple and one lesbian couple who want to marry. In its suit, which went to trial in California this week, the group embraced the second conclusion about the nature of marriage. They presented their argument in a brief signed by Theodore Olson, former solicitor general for President George W. Bush, and David Boies, who represented then-Vice President Al Gore in the fight over Florida's vote count in the 2000 presidential election.

These lawyers are asking the court to recognize that marriage is not a "static institution" but one that changes and will continue changing as part of an "evolving society."

"Moreover, the evidence at trial will show that there is no such thing as 'traditional marriage,' at least as Proponents use that phrase, because marriage historically has not been a static institution," says their brief. "Rather, the legal rules defining marriage have evolved over time. Plaintiff's experts will testify that marriage has changed over time to reflect the changing needs, values and understanding of our evolving society."

Following from their assumption that marriage is a malleable institution that government can change, these lawyers argue that it violates the Equal Protection Clause of the 14th Amendment for the government to prevent two people of the same sex from marrying each other. They claim it is unjust discrimination based on sexual orientation, sex and even "defined" gender roles.

Proposition 8, they say, "violates equal protection because it impermissibly discriminates on the basis of sexual orientation and sex."

Proposition 8, they continue, also violates equal protection because it "prohibits a man from marrying the same person that a woman would be free to marry and, vice versa."

Moreover, they say, "the so-called 'traditional' marriage that Proponents claim Prop. 8 was intended to preserve is one that defined roles based on sex and reflects a time of de jure and de facto gender inequality."

So, under the Constitution as interpreted by these advocates of homosexual marriage, where can a state permissibly set limits on matrimony? Would three people have an "equal protection" right to marry each other? Of course they would. So would four, five, six or 600. What was and was not a marriage would only be determined by "the changing needs, values and understanding of our evolving society."

The first victims of this specious quest to "evolve" our society by declaring same-sex marriage a constitutional right would be the most vulnerable class of Americans: children.

The argument of super-lawyers Olson and Boies assumes on its face that children have neither a need nor a right to a father or a mother. It attacks the very idea of motherhood and fatherhood

If federal judges do indeed hold that the claimed right of two men to marry each other trumps the natural right of a child to be loved and nurtured by a mother and father, we should not expect the uprooting of natural law as the basis for positive law in our society to end with this brutal disregard for the rights of children. The courts might as well declare that 1 plus 1 equals 4.

Biden's Vaccine Mandate for Federal Workers Met with Mixed Reactions: 'An Infringement on Civil Rights'
Rebecca Downs
Biden Kicks Off Vaccine Mandate Announcement by Contradicting CDC Guidance
Spencer Brown
Chip Roy Schools Texas Democrats: 'You're Aware You're Violating Texas Law by Being Here Instead of in Texas?'
Rebecca Downs
Biden's Latest Offer to the Unvaccinated Shows the Extent of the Messaging Failure on the COVID Vaccine
Matt Vespa
The Biden Administration May Have Had Its Most Hypocritical Day Yet on Stopping the Spread