U.S. Won't Secure a Single Additional Mile of Border in 2010 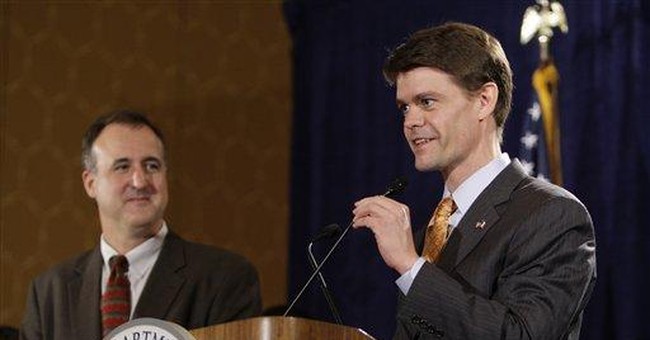 The U.S. Department of Homeland Security is planning to move several hundred Border Patrol agents away from the U.S.-Mexico border and will not secure a single additional mile of the U.S. border in fiscal 2010, according to the department's annual performance report.

Excluding the border between Alaska and Canada, the combined length of the U.S. borders with Mexico and Canada is about 6,000 miles (with almost 2,000 miles along the Mexican frontier and 4,000 along the Canadian).

The DHS annual performance report lists as the department's top goal: "Protect our nation from dangerous people." Under this goal, it lists as one program: "Border security and control between ports of entry." The goal of this program is: "Prevent potential terrorists, means of terrorism or other unlawful activities from entering the U.S. along our land borders by gaining operational control in areas deemed as high priority for terrorist threat potential or other national security objectives."

One measure of this is goal is titled: "Border miles under effective control (including certain coastal areas)."

Until this year, the department showed steady progress in this metric.

But this year, the progress stalled.

In other words, whatever else it does over the next 12 months, the department does not plan to bring a single additional mile of border "under effective control."

The line on page 24 of the DHS report indicating that the department's goal for border miles "under effective control" will be the same for next year as it was for this year is marked with a discreet asterisk.

This asterisk leads to a footnote that appears to lay blame for the lack of progress on delays in deploying SBInet -- the so-called "virtual fence" that was supposed to help the Border Patrol catch clandestine border crossers with the help of sensors and other technologies -- and on the fact that during the coming year, hundreds of Border Patrol agents are going to be moved from the Mexican border to the Canadian border while only a "small increase" will be made in the new agents assigned to the southern border.

"The program plans to move several hundred Agents from the Southwest Border to the Northern Border to meet the FY 2010 staffing requirements, with only a small increase in new agents for the Southwest Border in the same year," says the footnote. "In addition, limited funding is being dedicated toward purchasing legacy technologies on the Southwest Border until the upgraded technology associated with SBInet is fully deployed. Given these factors, the program expects the miles of effective control to remain constant in FY 2010."

"Effective control" is defined in the department's strategic plan for 2008-2013 as follows:

"Border miles under control as defined in the National Strategic Plan is when the appropriate mix of personnel, equipment, technology and tactical infrastructure has been deployed to reasonably ensure that when an attempted illegal entry is detected, the Border Patrol has the ability to identify, classify and respond to bring the attempted illegal entry to a satisfactory law enforcement resolution."

Press officers at the Department of Homeland Security and Customs and Border Protection failed to respond to inquiries I made about the DHS annual performance report over the course of several days.

On Friday, the nation will commemorate the eighth anniversary of the Sept. 11, 2001, terrorist attacks.