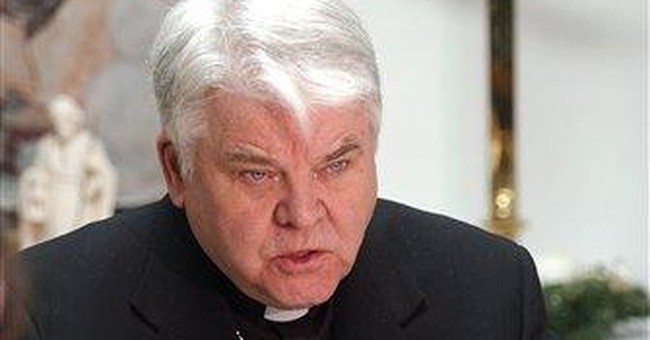 Countless American Catholic boys have on some fall Saturday in their young lives been thrilled to witness -- in person, on radio or on TV -- a Notre Dame comeback on the football field.

Now, a rising generation of American Catholics may witness a Notre Dame comeback of a higher order.

This comeback is not about touchdowns and field goals. It is about faith and country.

Our nation is now heading deeper into a cultural war that has already divided our society for decades. Whether Notre Dame's current leadership likes it or not, the school is inextricably involved in this war, which is a conflict over fundamental questions of morality on which the Catholic Church takes an inalterable stand.

Shall it forevermore be legal in America to kill an unborn child? Shall the government grant cohabitating homosexuals the same legal rights as married couples, including the right to adopt children?

The Catholic position is clear: Abortion and same-sex unions are wrong and must never be legalized.

President Barack Obama's position is equally clear: Abortion should be legal, and homosexual unions should have the same legal status as marriage.

In 2004, the U.S. Conference of Catholic Bishops published a document -- "Catholics in Political Life" -- clearly stating the bishops'

understanding of how Catholic institutions such as Notre Dame should deal with politicians who defy fundamental moral principles.

"The Catholic community and Catholic institutions should not honor those who act in defiance of our fundamental moral principles," said the bishops. "They should not be given awards, honors or platforms which would suggest support for their actions."

Nonetheless, Notre Dame announced on March 20 that Obama would not only give the school's May 17 commencement address, but that he also would receive an honorary doctorate in law.

This threatened to send a scandalous message to every young Catholic in America: The church does not take seriously its own views on the right to life and the sanctity of marriage.

A few years ago, Notre Dame's decision might not have elicited a sustained reaction from American Catholics. Yet, now it seems to have awakened a sleeping giant.

It started with Bishop John D'Arcy of Fort Wayne-South Bend, in whose diocese Notre Dame is located, announcing he would boycott the school's graduation, noting that a bishop "teaches not only by his words -- but by his actions."

Then Cardinal Francis George, president of the U.S. Conference of Catholic Bishops said, "Whatever else is clear, it is clear that Notre Dame didn't understand what it means to be Catholic when they issued this invitation."

Then Bishop Thomas Olmsted of Phoenix sent a letter to the Rev. John Jenkins, Notre Dame's president, stating that Notre Dame's invitation to Obama was "a public act of disobedience to the bishops of the United States."

By the end of April, more than 40 Catholic bishops had spoken up against Notre Dame honoring Obama.

Lay Catholics were being heard, too. The Cardinal Newman Society, an organization dedicated to "renewing and strengthening Catholic identity at America's 224 Catholic colleges and universities," organized a petition campaign asking Jenkins to rescind the invitation to Obama. More than 340,000 people have signed that petition.

On Monday, Harvard Law Professor Mary Ann Glendon announced that she would not accept Notre Dame's Laetare Award, which she was scheduled to receive at the same ceremony where Obama would receive his honorary law degree. In a letter to Jenkins, Glendon said she was "at a loss to understand why a Catholic university should disrespect" the bishops' request that those who defy fundamental moral principles not be honored by Catholic institutions.

Notre Dame expects Obama to wear its traditional academic robe when he receives his honorary doctorate. As reported by Edwin Mora of CNSNews.com, this robe bears Notre Dame's coat of arms -- with the words "Vita, Dulcedo, Spes" -- inscribed on its chest. These words, which mean "our life, our sweetness and our hope," come from a traditional prayer to the Virgin Mary.

"The combination of these phrases with the symbol for the university indicates the dedication of all Notre Dame's activities, intellectual, spiritual, athletic and so on, to Our Lady," explained an article in the February 1931 issue of the Notre Dame alumni magazine.

How can granting an honorary law degree to a pro-abortion politician be dedicated to Our Lady? It cannot be.

But the cause of taking Notre Dame back, of remaking it into the institution it once was -- where there was not only a Fighting Irish football team but a fighting Catholic tradition -- most certainly can be.

That would be Notre Dame's greatest comeback of all time.