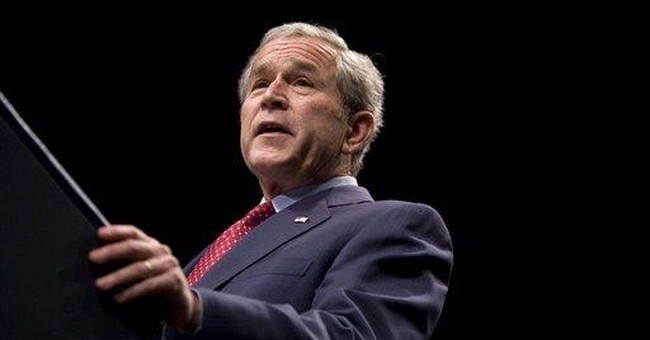 Bill Kristol, the often insightful, ever-influential editor of The Weekly Standard, used his column in The New York Times this week to offer some advice to conservatives who advocate small government: Cut it out.

The essence of Kristol's argument is that small government is not popular, therefore advocating it is not a smart strategy for a political faction seeking power in a representative government.

To illustrate his point, Kristol picked the inapt example of President Bush's Medicare prescription drug entitlement, noting that Republicans failed politically when they attempted to roll back Medicare and succeeded when they worked to expand it.

"Indeed, the 'Republican Revolution' of 1995 imploded primarily because of the Republican Congress' one major small-government-type initiative -- the attempt to 'cut' (i.e., restrain the growth of) Medicare," wrote Kristol. "George W. Bush seemed to learn the lesson. Prior to his re-election, he proposed and signed into law popular (and, it turned out, successful) legislation, opposed by small-government conservatives, adding a prescription drug benefit to Medicare.

I am not trying to make an abstract point of principle here, but a practical one. Just as unchecked vice in individuals ultimately leads to the breakdown of those who indulge in it -- as Americans can learn just from looking around their neighborhoods -- unchecked vice in government ultimately leads to the breakdown of nations.

America's addiction to federal entitlement programs is a vice. Unchecked, it will break our nation.

Kristol doesn't see it that way. "I can't help but admire some of my fellow conservatives' loyalty to the small government cause," he wrote in the Times. "It reminds me of the nobility of Tennyson's Light Brigade, as it charges into battle: 'Theirs but to do and die.' Maybe it would be better, though, first to reason why."

In January, then-Comptroller General David Walker submitted testimony to the Senate on America's "Long-Term Fiscal Outlook." It was subtitled: "Action Is Needed to Avoid the Possibility of a Serious Economic Disruption in the Future."

Walker informed the committee that the total bill for all the Social Security, Medicare and other entitlement promises the government has made now exceeds the projected tax revenue assigned to cover these promises by a cool $53 trillion.

"Imagine we decided to put aside and invest today enough to cover these promises tomorrow," Walker said. "It would take approximately $455,000 per American household -- or $175,000 for every man, woman and child in the United States."

That's more money than most American families can afford to invest in a home of their own -- let alone in someone else's Social Security check and health-care bills.

Walker said the problem was getting worse, not better, specifically pointing to Bush's drug entitlement (otherwise know as Medicare Part D) as a contributing cause. In testimony submitted to the Senate in June, acting-Comptroller General Gene Dodaro indicated that the government's unfunded liability for Medicare Part D alone equaled $8 trillion, exceeding the $7 trillion unfunded liability for all of Social Security.

In other words, Bush entered office with the country facing an eventual insolvency crisis in Social Security. He failed to solve it. Instead, he enacted a new entitlement -- Bill Kristol's "popular (and, it turned out, successful)" prescription drug plan -- that created an additional unfunded liability greater than the one imposed by Social Security.

Americans owe a total of $11.2 trillion on their home mortgages, according to the Federal Reserve. But that is dwarfed by the $53 trillion the comptroller general says we owe to cover the unfunded costs of entitlement benefits the federal government has already promised on our behalf.

None of this, of course, counts any of the money the government will borrow to pay for industry bailouts or to fund new entitlement programs such as the national health-care plan President-elect Obama promised in his campaign.

Richard Fisher, president of the Federal Reserve Bank of Dallas, told San Francisco's Commonwealth Club in a June speech that he saw "a frightful storm brewing in the form of untethered government debt." "Unless we take steps to deal with it," said Fisher, "the long-term fiscal situation of the federal government will be unimaginably more devastating to our economic prosperity than the subprime debacle and the recent debauching of credit markets that we are now working so hard to correct."

Americans may realize too late, as Tennyson would say, that "someone had blunder'd." But it won't be small-government conservatives who led this nation into that fiscal Valley of Death.