The Battle of the Surge Was a Win 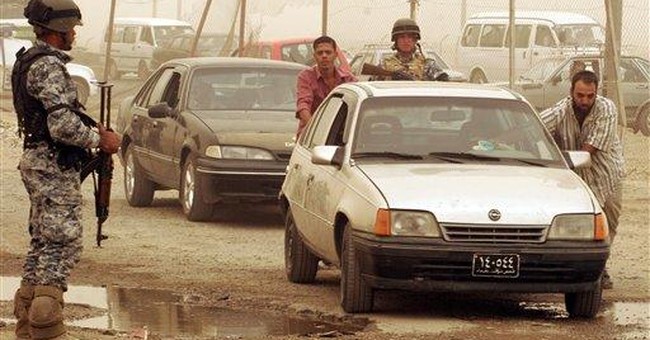 Page 12 of a Government Accountability Office report published June 23 features data about the war in Iraq -- drawn from the Defense Intelligence Agency -- that must be central to the debate about what the United States does next in that country.

It indicates we have started to win a war we cannot afford to lose.

The first fact the chart reveals: We are now almost two years past the point where overall enemy attacks in Iraq (the combined number of attacks against civilians, Iraqi forces and coalition forces) peaked.

The second fact the chart reveals: The peak in overall enemy attacks was reached in October 2006 -- the month leading up to the 2006 U.S. congressional elections.

The third fact the chart reveals: Attacks against coalition forces (not counting the attacks against Iraqi civilians and Iraqi forces) continued to rise after the overall number of attacks peaked, reaching their own peak in June 2007 -- the month that the U.S. troop surge went full-force.

The fourth fact the chart reveals: Since the troop surge went full-force in June 2007, enemy attacks in Iraq have dropped dramatically.

While attacks increased somewhat in March and April of this year, they dropped again in May, falling to a level even lower than they had in February.

Meanwhile, al-Qaida in Iraq has been delivered a staggering blow -- although not a knockout punch

"According to MNF-I, DOD and State reports, rejection of al-Qaida in Iraq by significant portions of the population and operations to disrupt AQI networks have helped decrease violence in Iraq," says GAO. "However, AQI is not defeated and maintains the ability to carry out high-profile attacks."

What caused these good things to happen?

The GAO attributes them to: "(1) the increase in U.S. combat forces, (2) the creation of nongovernmental security forces such as Sons of Iraq and (3) the Mahdi Army's declaration of a ceasefire."

But would Nos. 2 and 3 have happened had the United States not done No. 1?

Surely, the Sunni insurgents who made the political decision to stop fighting the United States and start defending their own communities were informed by the surge, as, no doubt, was the Mahdi Army.

And that is not the only political progress the surge inspired. The Iraqi government has also enacted laws liberalizing the de-Baathification measures taken earlier in the war, providing amnesty to some insurgents and setting a deadline for provincial elections.

It is true that other major reforms have not been accomplished. These include enacting laws setting the actual procedures for provincial elections, distributing Iraq's vast oil resources, disarming militias and amending Iraq's constitution to facilitate sustainable reconciliation between Sunnis, Shias and Kurds.

So, the question now: Which strategic decision by our own politicians is more likely to bring victory? Should we continue the strategy that delivered the security and political progress of the past year? Or should we abandon it and begin withdrawing from the country?

In truth, the most important sign of progress in Iraq was not included in the GAO report: Our casualties have declined.

Using a database of U.S. casualties constructed by Cybercast News Service from Defense Department information, my Cybercast News Service colleague Kevin Mooney has reported that in the first five months of 2008, the United States suffered 14 casualties in Anbar Province, down 89 percent from the 124 suffered in the first five months of last year. U.S. casualties in the province are now the lowest since 2003.

President Bush's decision send more troops and Gen. David Petraeus plan for using them, resulted in more security in Iraq, more political progress and fewer American dead. The Battle of the Surge was a win.