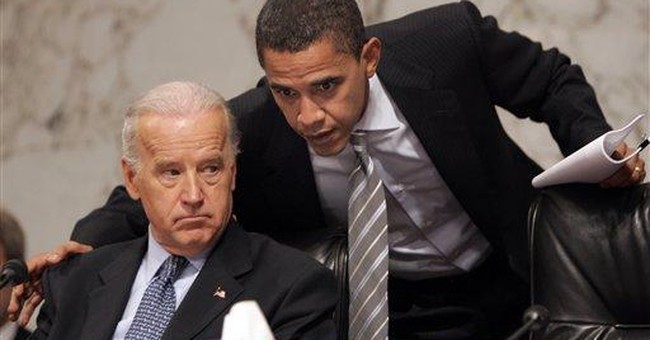 When the nomination of John Roberts to be chief justice of the Supreme Court came up in the Senate in 2005, Sen. Barack Obama argued that the role of a justice is to favor the "weak" over the "strong."

When the nomination of Sam Alito came up in January 2006, he made the same argument.

During the Roberts nomination debate, he argued that most Supreme Court cases involve no real controversy, "so that both a Scalia and a Ginsburg will arrive at the same place most of the time on those 95 percent of cases."

In the other 5 percent, he argued, the determining factor is not what the law in question says, or what the Constitution says, but the emotional disposition that the justices deciding the case have toward the parties disputing it. "In those difficult cases," Obama said, "the critical ingredient is supplied by what is in the judge's heart." Roberts and Alito were bad judges, he decided, because their hearts weren't in the right place.

"The problem I had is that when I examined Judge Roberts' record and history of public service, it is my personal estimation that he has far more often used his formidable skills on behalf of the strong in opposition to the weak," Obama said in a floor speech on Sept. 22, 2005.

"When I examine the philosophy, ideology and record of Samuel Alito, I am deeply troubled," Obama said in another floor speech on Jan. 26, 2006. "There is no indication that he is not a man of fine character. But when you look at his record, when it comes to his understanding of the Constitution, I found that in almost every case he consistently sides on behalf of the powerful against the powerless."

Implicitly conceding that Roberts would be confirmed, Obama said, "I hope he will recognize who the weak are and who the strong are in our society."

So, in Obama's vision, who are the "weak" and who are the "strong"? Who deserves to win the "hearts" of Supreme Court justices? Who does not?

In contrast to his soaring campaign rhetoric about bringing America together, Obama's Senate speeches against Roberts and Alito revealed a polarizing vision of America. Minorities, women, employees and criminal defendants were among the weak, majorities, men, employers and prosecutors were among the strong.

"In his work in the White House and the Solicitor General's Office, he seemed to have consistently sided with those who were dismissive of efforts to eradicate the remnants of racial discrimination in our political process," Obama said of Roberts. "In these same positions, he seemed dismissive of concerns that it is harder to make it in this world and in this economy when you are a woman rather than a man."

Alito had a similar problem, only with different preferred victim classes.

Obama expressed disappointed that when he interviewed John Roberts he could not get the judge to reveal more of his personal feelings. "Judge Roberts confessed that, unlike maybe professional politicians, it is not easy for him to talk about his values and deeper feelings," Obama said. "That is not how he is trained."

Rather than trying to get up-close-and-personal with Roberts, Obama should have listened more carefully to the judge's testimony in the Senate Judiciary Committee. It clearly explained why judges must not consider who is "weak" and who is "strong" in a case, or consult their personal sympathies in making decisions that must be based on the facts and the law.

"Judges are like umpires. Umpires don't make the rules; they apply them," said Roberts. "I will decide every case based on the record, according to the rule of law, without fear or favor, to the best of my ability. And I will remember that it's my job to call balls and strikes, and not to pitch or bat."

If Obama becomes president, he will try to stack the court not with umpires, but with players who put their heart in every game -- consistently pitching and batting for Obama's favorite teams.