Obama is the Most Pro-Abortion Candidate Ever 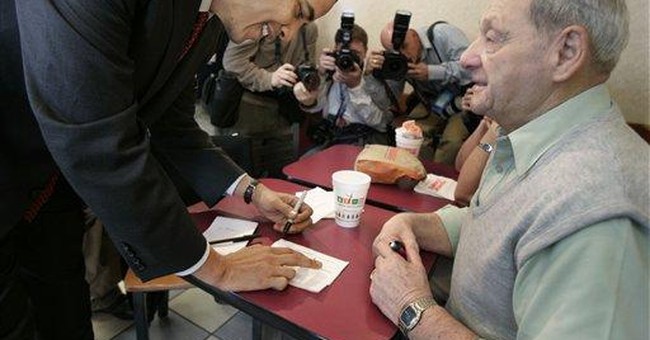 Barack Obama is the most pro-abortion presidential candidate ever.

He is so pro-abortion he refused as an Illinois state senator to support legislation to protect babies who survived late-term abortions because he did not want to concede -- as he explained in a cold-blooded speech on the Illinois Senate floor -- that these babies, fully outside their mothers' wombs, with their hearts beating and lungs heaving, were in fact "persons."

"Persons," of course, are guaranteed equal protection of the law under the 14th Amendment.

In 2004, U.S. Senate-candidate Obama mischaracterized his opposition to this legislation. Now, as a presidential frontrunner, he should be held accountable for what he actually said and did about the Born Alive Infants Bill.

State and federal versions of this bill became an issue earlier this decade because of "induced labor abortion." This is usually performed on a baby with Down's Syndrome or another problem discovered on the cusp of viability. A doctor medicates the mother to cause premature labor. Babies surviving labor are left untreated to die.

Jill Stanek, who was a nurse at Christ Hospital in Oak Lawn, Ill., testified in the U.S. Congress in 2000 and 2001 about how "induced labor abortions" were handled at her hospital.

"One night," she said in testimony entered into the Congressional Record, "a nursing co-worker was taking an aborted Down's Syndrome baby who was born alive to our Soiled Utility Room because his parents did not want to hold him, and she did not have the time to hold him. I couldn't bear the thought of this suffering child lying alone in a Soiled Utility Room, so I cradled and rocked him for the 45 minutes that he lived."

In 2001, Illinois state Sen. Patrick O'Malley introduced three bills to help such babies. One required a second physician to be present at the abortion to determine if a surviving baby was viable. Another gave the parents or a public guardian the right to sue to protect the baby's rights. A third, almost identical to the federal Born Alive Infant Protection Act President Bush signed in 2002, simply said a "homo sapiens" wholly emerged from his mother with a "beating heart, pulsation of the umbilical cord or definite movement of voluntary muscles" should be treated as a "'person,' 'human being,' 'child' and 'individual.'"

Stanek testified about these bills in the Illinois Senate Judiciary Committee, where Obama served. She told me this week he was "unfazed" by her story of holding the baby who survived an induced labor abortion.

On the Illinois Senate floor, Obama was the only senator to speak against the baby-protecting bills. He voted "present" on each, effectively the same as a "no."

"Number one," said Obama, explaining his reluctance to protect born infants, "whenever we define a pre-viable fetus as a person that is protected by the Equal Protection Clause or the other elements in the Constitution, what we're really saying is, in fact, that they are persons that are entitled to the kinds of protections that would be provided to a -- a child, a 9-month old -- child that was delivered to term. That determination then, essentially, if it was accepted by a court, would forbid abortions to take place. I mean, it -- it would essentially bar abortions, because the Equal Protection Clause does not allow somebody to kill a child, and if this is a child, then this would be an anti-abortion statute."

That June, the U.S. Senate voted 98-0 in favor of the Born Alive Infants Protection Act (although it failed to become law that year). Pro-abortion Democrats supported it because this language was added: "Nothing in this section shall be construed to affirm, deny, expand or contract any legal status or legal right applicable to any member of the species homo sapiens at any point prior to being born alive as defined in this section."

Democratic Sen. Barbara Boxer explained that with this language the "amendment certainly does not attack Roe v. Wade."

On July 18, 2002, Democratic Sen. Harry Reid called for the bill to be approved by unanimous consent. It was.

That same year, the Illinois version of the bill came up again. Obama voted "no."

In 2003, Democrats took control of the Illinois Senate. Obama became chairman of the Health and Human Services committee. The Born Alive Infant bill, now sponsored by Sen. Richard Winkel, was referred to this committee. Winkel also sponsored an amendment to make the Illinois bill identical to the federal law, adding -- word for word -- the language Barbara Boxer said protected Roe v. Wade. Obama still held the bill hostage in his committee, never calling a vote so it could be sent to the full senate.

A year later, when Republican U.S. senate candidate Alan Keyes challenged Obama in a debate for his opposition to the Born Alive Infant Bill, Obama said: "At the federal level there was a similar bill that passed because it had an amendment saying this does not encroach on Roe v. Wade. I would have voted for that bill."

In fact, Obama had personally killed exactly that bill.