Get the ACLU Out of Our Bathrooms 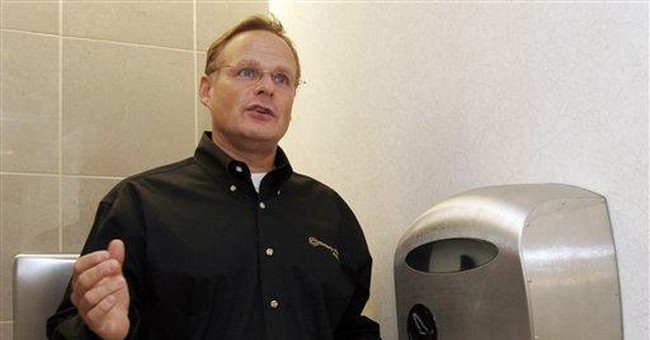 The American Civil Liberties Union has argued in recent years that the right to privacy is so expansive it extends even to partial-birth abortion, in which a doctor kills a fully formed, almost-born child with scissors.

"The ACLU has a long history of vigorously defending the right to privacy -- including the right to reproductive freedom," the organization told the Supreme Court last year in a brief arguing that partial-birth abortion is a constitutional right.

But two recent court cases demonstrate there is at least one place where the ACLU rejects the right to privacy -- at least for certain classes of people. It is in the bathroom.

Last week, the U.S. Court of Appeals for the 10th Circuit upheld a decision by U.S. District Judge David Sam, who spurned the ACLU's claim that an anatomical male had a right to use women's restrooms.

Krsytal Etsitty, the plaintiff, had described herself, according to Judge Sam's opinion, as a "pre-operative transsexual." In 1999, Etsitty changed his name from Michael to Krystal and the sex designation on his driver's license from male to female. He took hormones that altered his "outward appearance in some ways." But he did not change his anatomy.

In 2001, the Utah Transit Authority hired him to be a bus driver. Judge Sam, who referred to Etsitty by the female pronoun, said: "At the time she applied for her job with UTA and throughout the training period, plaintiff dressed as a man and used the men's restroom."

After he was hired, however, Etsitty informed his supervisor that "she was transsexual and that she would be appearing more traditionally female at work." This posed a logistical problem for the bus company. It had arranged for its drivers to have access to the public restrooms at certain businesses along its routes. Would Etsitty use the male or female restrooms?

Etsitty informed her supervisors, according to the court, "that she had some kind of written direction that required that she use female restrooms." The supervisors told Etsitty "they were concerned about potential liability from co-workers, customers and the general public as a result of plaintiff, a biological male, using female restrooms." The company let her go, notifying her, as reported by Findlaw, that she would be eligible for rehiring "once she completed the surgery."

Etsitty sued, citing a federal law that bans discrimination based on "sex."

In the ACLU's view, not only was Etsitty's anatomy irrelevant, so, too, was the right to privacy of anyone who happened to be in a women's room Etsitty might use. "(N)o court has ever held that there is any legal right to privacy that would be violated simply by permitting a transgender person to use a public bathroom that corresponds to his or her gender identity," said the ACLU.

Besides, even if privacy was an issue in public restrooms, the ACLU suggested, the architecture in such facilities protects it. As Etsitty had explained to his supervisors, according to the ACLU, his anatomy would be shielded from others using the women's rooms "because there are stalls for privacy."

Alas, the ACLU published this brief two years ago -- apparently failing to anticipate that Republican Sen. Larry Craig of Idaho would someday seek to withdraw his guilty plea for engaging in "disorderly conduct" in a men's room stall.

In a brief submitted this month supporting Craig's claim, the ACLU argued that what the senator is alleged to have done in an airport bathroom is free speech protected by the First Amendment -- no matter what some guy seeking a little privacy in the next stall might think about it.

"The government does not have a constitutionally sufficient justification for making private sex a crime," said the ACLU. "It follows that an invitation to have private sex is constitutionally protected and may not be made a crime. This is so even where the proposition occurs in a public place, whether in a bar or a restroom."

But then the ACLU went a step further, arguing that there is not only a right to solicit sex, but also to engage in it, in a public restroom.

"The Minnesota Supreme Court," said the ACLU, "has already ruled that two men engaged in sexual activity in a department store restroom with the stall door closed had a reasonable expectation of privacy. They were, the Court held, therefore acting in a private, not a public place."

The conflated logic of the ACLU's bathroom briefs seems to be that someone entering a public restroom intending to use it for traditional purposes has no protection either from the gender sign posted at the door or from the otherwise vaunted right to privacy. Someone entering a public restroom intending to solicit and engage in sex, on the other hand, is protected by both the First Amendment and the right to privacy.

What else would you expect from a group that embraces an ideology that holds that partially born babies have no right to keep their skulls intact?

Why Four Democrats Are Suddenly Regretting Supporting Joe Biden
Townhall
Here's how Dems can crush Republicans in New York with redistricting
Twitchy
What Happened With GameStop, Reddit, and Some Wall Street Hedge Funds -- and What Might It Mean?
Redstate
The Morning Briefing: Sycophant Press Can't Cover for Biden's Opening Train Wreck
PJ Media