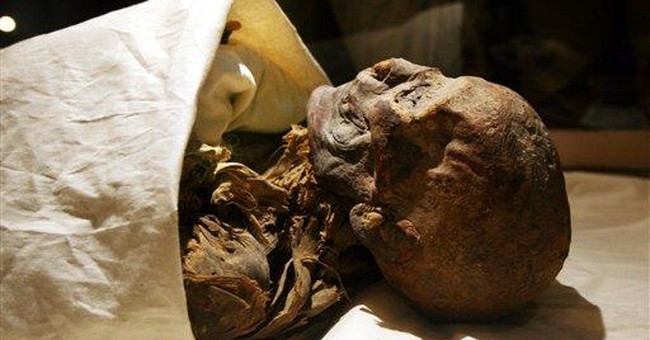 Some believe the greatest emerging threat to the human race can be found in the Middle East, where terrorists seek weapons of mass destruction. Others point to melting glaciers, adamant they have discovered proof of environmental doom.

I suspect a far greater threat to our species emerged this month in a politely worded report issued by a British parliamentary committee.

Last December, the British government published a white paper ostensibly calling for a ban on creating what it called "inter-species embryos." The suggested prohibition, however, was not absolute. It would have left Parliament the power to approve exceptions for research purposes.

Britain then began considering a new law that would allow government-licensed researchers to create embryos that were part human and part animal.

As British parliamentarians saw it, the big question was not whether scientists should be allowed to create human-animal hybrids, but exactly what types of hybrids should be permitted and what rules should govern their willful creation and destruction.

A panel of lords, baronesses and members of the House of Commons pondered the issue for two months. On Aug. 1, it published a modest proposal that could have been drafted by Jonathan Swift.

Having defined these four creatures, whose actual construction is apparently within the reach of contemporary technology, the committee turned its attention to the undeniable reality that once the door of the human-hybrid laboratory is unlocked, researchers venturing there may come up with new -- perhaps unimaginable -- permutations of man and beast.

The parliamentary committee rejected this cutoff point, arguing there was no logical reason to it.

No sooner had the committee begun debating just how many percentage points of humanity an embryo must possess before it ought to be considered human than a thorny question of bureaucratic jurisdiction arose.

"The second issue centers on the human-animal boundary and which entities should be regulated as human embryos and which should be regulated under the Animals (Scientific Procedures) Act of 1986," the committee's report explained. "We have received a lot of evidence suggesting there is no principle, as such, which underpins the government's choice of 50 percent as a cut-off point for whether an entity is sufficiently human to merit regulation by the (Human Fertilization and Embryology Authority), or whether it is more appropriately regulated as an animal by the Home Office."

Then, there was a not-so-subtle hint that it might matter which 50 percent is animal and which is human. Nonetheless, such technicalities could not be allowed to stand in the way of progress.

"For example," said the report, "Professor Martin Bobrow, chair of the Academy of Medical Sciences working party on interspecies embryos, told us that what makes an entity human rather than animal is not easily measured in DNA terms, although, if a line in the sand had to be drawn, he saw no reason why it should not be drawn at 50 percent."

OK. But, the committee wondered, should the 50 percent be "measured by the mass or the number of genes"?

"You may start off with an embryo which is 20 percent human and end up with something which is 60 percent human or vice versa," Dr. Robin Lovell-Badge, a leading British stem cell researcher told the committee.

That did it. The committee completely chucked the percentage approach to humanity.

"We can see no clear reason why certain categories of inter-species embryo should be permitted under license and 'true' hybrids proscribed," it said. Accordingly, it re-crafted the "catch-all" rule, defining as an interspecies any embryo that has some human chromosomes as well as some animal chromosomes.

It then decided to treat all embryos like animals, recommending that researchers be permitted to create them and do what they will with them -- as long as they uniformly kill them by 14 days.

Those who worship science as a god have long been trying to prove that man evolved accidentally from a brute beast. Having thus far failed to produce definitive evidence of this, they are now hoping to prove they can reverse the process.