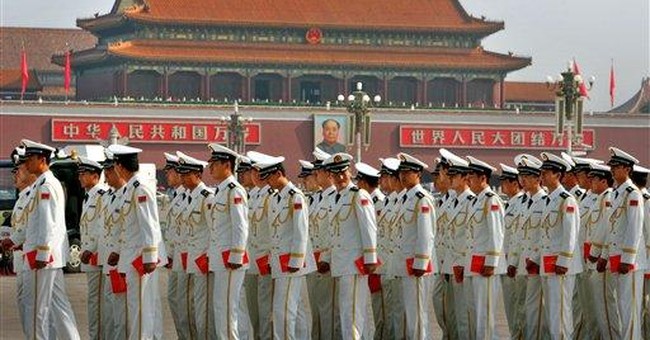 Tiananmen Square, where tanks mowed down pro-democracy demonstrators 18 years ago, was the scene this week of a celebration to mark the one-year countdown to next year's summer Olympics, which will be held in Beijing.

The same communist regime that killed democracy advocates in 1989 will host the Olympics in 2008.

The first Gold Medal of these games should be awarded to the Chinese Politburo for its Olympian achievements in religious persecution.

In the past month, these achievements have been particularly prodigious in the priest-snatching category.

The most recent spate of clergy incarcerations began not long after Pope Benedict XVI publicly released a letter to the Catholics of China.

In part, this letter was an effort to reach out to the Chinese regime, which has outlawed the Roman Catholic Church since 1951 and which, since 1957, has operated its own "official" church called the Chinese Catholic Patriotic Association, in which the bishops and priests are picked and registered by the communist government.

In part, the pope's letter was a statement of things the church views as nonnegotiable in its future relations with that regime.

While the pope conceded that "the Catholic Church which is in China does not have a mission to change the structure or administration of the state," he insisted that "at the same time, though, compliance with those authorities is not acceptable when they interfere unduly in matters regarding the faith and discipline of the church."

He flatly rejected China's claim to religious authority over the church or its bishops. "(T)he proposal for a church that is 'independent' of the Holy See, in the religious sphere, is incompatible with Catholic doctrine," he said.

On July 5, Wen Wei Po, a pro-Communist newspaper based in Hong Kong, published what it described as the first response by an "authoritative personage" to the pope's letter. "Such a pastoral letter is unacceptable to us," said the personage, "and will add new obstacles to the dialogue between China and the Vatican in the next step."

The paper derisively described the "underground" Catholic Church in China as a moribund institution with no more than 900,000 members, who were served by only a dozen octogenarian bishops who because of old age had "lost their ability to move about."

Soon, however, the regime was arresting both very mobile and very young underground priests.

Sometime in early July, 50-year-old Father Cui Tai, a priest loyal to Rome, made the mistake of getting in a minor motorcycle accident in Hebei Province. Chinese police detained him, according to the Connecticut-based Cardinal Kung Foundation, which follows the church in China. He has been locked in the local jail ever since.

On July 24, policemen came to the door of a Catholic home in Inner Mongolia. Thirty-four-year-old Father Gao Jinbao, 35-year-old Father Lian Aijun and 41-year-old Father Wang Zhong had been hiding there after fleeing from Hebei Province, where they had refused to join the official government church. The priests were first kept incommunicado in an iron cage, according to the Cardinal Kung Foundation, then carted off to parts unknown.

These arrests were in keeping with the longstanding anti-religious practices of China's regime, which have been unchanged by almost two decades of post-Tiananmen Square Massacre "engagement" with Western business interests and trading partners. "Harassment of unregistered Catholic bishops, priests and laypersons, including government surveillance and detentions, continued," says the State Department's most recent report on human rights in China.

There are not 900,000 underground Catholics in China, says State. There are about 4.5 million members in the official government church, and something more than 4.5 million in the underground church. These underground millions are not served by a mere 12 octogenarian bishops who are hobbled by age, but according to the State Department's report on religious freedom, by "approximately 40 bishops operating 'underground,' some of who were likely in prison or under house arrest."

When the Olympics convene next summer, the eyes of the world will momentarily focus on fleeting athletic triumphs. China may or may not reap a transitory propaganda victory. But Pope Benedict has his eyes on a more enduring prize. Citing Christ's command to "make disciples of all nations," he wrote to the church in China, "Now, at the dawn of the third millennium, it is your turn."