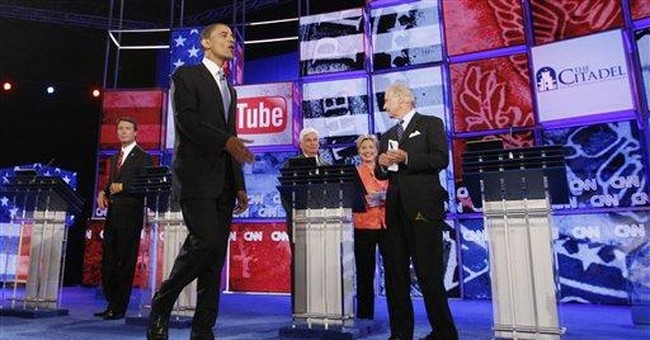 I suspect the way many viewers reacted to this week's Democratic presidential debate co-sponsored by CNN and YouTube depended on whether they generally see themselves on the taking or giving end of government transactions.

During the debate, various candidates suggested increasing government by mandating universal health care coverage, health care coverage for illegal aliens, a massive increase in the minimum wage, a minimum salary for school teachers, more spending on public schools generally, cars that get 50 miles per gallon and even reparations for slavery.

An early defining moment came when former Sen. John Edwards of North Carolina, who became a multimillionaire by suing doctors, tried to establish his credentials as Taker in Chief, the Democrat most likely to use government to confiscate things from people.

The "we" here, of course, is government. The "them" are the people who own insurance, drug and oil companies. That means stockholders. Edwards, in other words, wants to increase the power of government by diminishing the power of the many millions of citizens scattered all across America who are diligently saving and investing what they can today in the stock market so they won't have to depend on the government and Social Security tomorrow.

Another defining moment came when the candidates tried to outbid each other on the minimum wage. Again, Edwards anted first. "I would challenge every Democrat on this stage today to commit to raising the minimum wage to $9.50 an hour by the year 2012," he said.

Sen. Hillary Clinton of New York, who earned millions by selling a book about her life with husband Bill, outbid Edwards. "I put in legislation which said that Congress should not get a salary increase until they did raise the minimum wage," she said.

Gov. Bill Richardson of New Mexico pushed an even bigger stack of chips onto the table, managing to combine increasing the minimum wage with another classic cause for the Party of Takers: increasing spending on public schools. "I would have a minimum wage for all our teachers, $40,000 per year," he said.

Who would pay for these increased wages? In the case of federally subsidized, $40,000-per-year, public-school kindergarten teachers, it would no doubt include some $35,000-per-year workers who would rather send their children to Catholic, Christian or Jewish schools, where few teachers make $40,000 per year.

In the case of a massive jump in the private-sector minimum wage (which is now $5.85), it would be paid by both small business owners and their workers. The government-mandated increase in the cost of labor would diminish both the number of jobs small business created and the number of small businesses, period. There is one place, however, where the minimum wage could have a salutary effect: among the Democratic presidential candidates who are paid by taxpayers right now. "If you're elected to serve, would you be willing to do this service for the next four years and be paid the national minimum wage?" asked a YouTube viewer. Sens. Joe Biden of Delaware and Chris Dodd of Connecticut prudently declined -- suggesting they were struggling to get by on their senators' salaries of $165,200 per year. Other candidates, however, leapt at the opportunity to show their solidarity with the Taking Class. "Sure," said Sen. Hillary Clinton, the rich author. "Yes, I would," said Gov. Bill Richardson, the teachers' advocate. "I would," said Rep. Dennis Kucinich of Ohio, the ceaseless populist. "Well, we can afford to work for the minimum wage because most folks on this stage have a lot of money," said Sen. Barack Obama of Illinois, the Harvard lawyer. Good for them. But why should they wait to see if they are elected president? Nothing is stopping these candidates -- and any other Democratic officeholder who shares their views -- from refunding to government treasuries starting today whatever portion of their compensation exceeds the federal minimum wage of $5.85 an hour. Terence P. Jeffrey is the editor of Human Events. To find out more about him, visit the Creators Syndicate web page at www.creators.com COPYRIGHT 2007 CREATORS SYNDICATE INC.