The Other Thing Reagan Said in Berlin 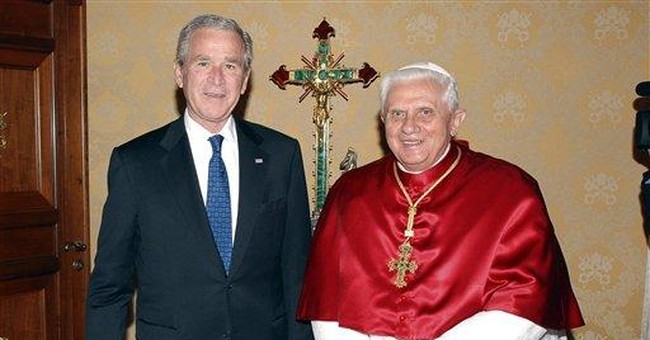 Western leaders searching for a long-term strategy to defend our civilization from fundamentalist Islam ought to reread the speech President Reagan delivered at the Berlin Wall 20 years ago this month.

It was neither democracy nor capitalism Reagan foresaw bringing down the wall. It was Christianity.

Reagan's demand that Soviet dictator Mikhail Gorbachev tear down the wall was the defining sound-bite of that speech, but it was another passage that defined the core meaning of the Cold War.

Pondering what sustained Berliners, surrounded as they were by the Soviet menace, Reagan concluded: "Perhaps this gets to the root of the matter, to the most fundamental distinction of all between East and West. The totalitarian world produces backwardness because it does such violence to the spirit, thwarting the human impulse to create, to enjoy, to worship. The totalitarian world finds even symbols of love and of worship an affront.

"Years ago, before the East Germans began rebuilding their churches, they erected a secular structure: the television tower at Alexander Platz. Virtually ever since, the authorities have been working to correct what they view as the tower's one major flaw, treating the glass sphere at the top with paints and chemicals of every kind. Yet even today when the sun strikes that sphere -- that sphere that towers over all Berlin -- the light makes the sign of the cross."

In Reagan's mind, their defining symbol was the wall, while ours was the cross. In any battle of faith and reason, our side would win.

And the wall did fall -- at the foot of the cross.

Even as Reagan spoke that day in Berlin, the forces of faith and reason were laying siege to Gdansk, Poland. On one side were Polish police, on the other, a Polish priest. The former came to intimidate the masses; the latter to say a Mass. "A crowd of more than 1 million people chanted, 'Solidarity, Solidarity!' as Pope John Paul II celebrated Mass today amid a massive show of police force in this city where the labor movement was born," The Associated Press reported of the event.

The Protestant president and Catholic pope won the Cold War in Eastern Europe without ever firing a shot there because Christianity had a more powerful and enduring grip on the soul of that region than communism could ever have. Eastern Europe is now free and at peace.

But the Cold War went differently in the Islamic world. In Afghanistan, U.S.-armed mujahideen drove out the Soviets, but also begat the Taliban and al-Qaida, groups quite different from Poland's Solidarity.

Even after U.S. forces threw the Taliban from power and established an Afghan democracy, a man named Abdul Rahman was threatened with prosecution and execution for the crime of converting to Christianity. He fled Afghanistan -- for Rome.

In nations where Islam is the dominant religion, conversion remains a one-way street. Non-Muslims may convert to Islam, but Muslims may not convert to any other religion. Freedom of conscience, the very core of liberty, is not merely denied, it can be a capital offense.

Nonetheless, President Bush's policy holds that the long-term key to countering the threat of fundamentalist Islam is to import our secular democratic political processes to the Islamic world -- as we have in Afghanistan and Iraq. In defense of this policy, he has ridiculed those who express doubts that these secular political processes alone can transform those cultures.

"We also hear doubts that democracy is a realistic goal for the greater Middle East, where freedom is rare," Bush said in his 2004 State of the Union Address. "Yet it is mistaken and condescending to assume that whole cultures and great religions are incompatible with liberty and self-government."

Did someone produce a National Intelligence Estimate -- like the one on Saddam Hussein's weapons of mass destruction -- advising the president this was so?

When President Bush met Pope Benedict last week, they discussed the fate of Iraq's Chaldean rite Catholics. Targeted by Muslim terrorists and unprotected by Iraq's Islamist -- yet democratically elected -- government, Chaldeans are fleeing a land where their ancestors kept the faith for 2,000 years.

In the clash of civilizations, the current strategy has the wrong side retreating.