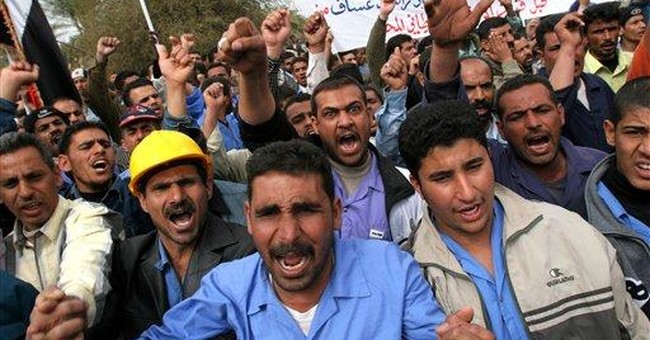 Before dawn on Dec. 21, U.S. forces raided the Baghdad compound of Sheik Abdul Aziz al Hakim, leader of the Supreme Council for the Islamic Revolution in Iraq (SCIRI).

Eight Iraqis and two Iranians were arrested. "Debriefing the detainees and investigation of the seized materials has yielded evidence linking some of the individuals being detained to weapons shipments to illegal armed groups in Iraq," said a slide presented by Maj. Gen. William Caldwell IV at a Dec. 27 briefing.

The raid was significant because SCIRI is part of the United Iraqi Alliance, the Shiite coalition that controls Iraq's government. Founded in exile in Iran, SCIRI controls a militia, the Badr Organization, which was trained in Iran (and which now claims to be a peaceful political organization).

Three weeks after the raid, Gen. Michael Hayden, the CIA director, testified in the Senate Intelligence Committee about "explosively formed projectiles" (EFPs), the most lethal bomb used against U.S. troops in Iraq.

"The EFPs are coming in from Iran," said Hayden. "They are being used against our forces. They are capable of defeating some of our heaviest armor, and incident for incident cause significantly more casualties than any other improvised explosive devices do, and they are provided to Shi'a militia."

This was not a new claim. But what was new after the December raid in Baghdad was the public emergence of circumstantial evidence suggesting that -- in addition to Shiite warlord Moqtada Sadr's Mahdi Army (JAM) -- the Badr Organization might also be involved in attacking Americans with Iranian help.

Last year, the Defense Department reported that Iran provided support to both JAM and Badr. But while DOD pointed a finger at JAM for attacking Americans, it exonerated the Badr Organization of that charge (if not of participating in anti-Sunni death squads).

"The Badr Organization receives financial and material support from Iran, and individuals from Badr have been implicated in death squads," said DOD's August report "Measuring Stability and Security in Iraq."

The May edition of the report said, "JAM and some smaller Shi'a extremist groups have attacked both Sunni Arabs and Coalition forces."

But the August edition said, "The Badr Organization has not engaged in active violence against Coalition forces or the government of Iraq."

This assessment lent plausibility to the Nov. 8 memo National Security Advisor Stephen Hadley sent to President Bush. It said the United States should consider helping Iraqi Prime Minister Nuri Al Maliki "form a new political base among moderate politicians from Sunni, Shia, Kurdish and other communities." The idea was to liberate Maliki from political reliance on Sadr's bloc in the Iraqi parliament.

This would require getting Hakim to join with Sunnis in a new cross-sectarian coalition that would back Maliki. "Press Sunni and other Iraqi leaders (especially Hakim) to support Maliki," Hadley advised.

Accordingly, President Bush met with Hakim on Dec. 4. Sitting beside Hakim in the Oval Office, Bush said, "I appreciated very much his eminence's strong position against the murder of innocent life."

According to a Jan. 29 report in The New York Times, the two Iranians captured there were specifically discovered in the home of Hadi al-Ameri, who is both leader of the Badr Organization and chairman of the security committee in Iraq's parliament.

On Dec. 30, The Washington Post reported that the Iraqi government had allowed the two captured Iranians to return to Iran. One of the two, the Post said, was Mohsen Chirazi, a top commander of the Iranian Revolutionary Guards' al-Quds Force, the unit that has armed and trained Lebanon's Hezbollah.

In a tightly controlled background briefing in Baghdad on Sunday in which Defense Department officials laid out evidence making their case that Iran is providing munitions, including EFPs, to anti-American fighters in Iraq, U.S. officials confirmed that one of the Iranians detained in December was indeed Chirazi.

"The raid at Hakim's compound netted Mohsen Chirazi, whom U.S. officials described as a high-ranking Quds Force operations chief, as well as documents with information about sniper rifles and mortars, the officials said," The Washington Post reported in its account of the Baghdad briefing. "The senior defense official said that when U.S. officials discussed the allegations with Hakim's representatives, their explanation was that 'it is normal for different groups to acquire armaments for protection purposes.'"

Appearing on CNBC's "Kudlow and Company" on Jan. 30, Under Secretary of State Nicholas Burns provided a different view. "We caught the Iranians red-handed just before Christmas inside a Shi'a headquarters with plans to attack American soldiers," he said.